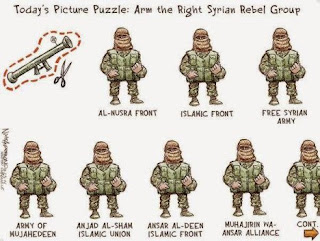 In a previous essay , I stated that Russian military help to the Syrian State was a response to a direct threat from the United States to attack Syrian armed forces, that I understood the Syrian uprising since 2011 as an instance of the ongoing program of regime change via jihiadi forces driven by the United States and its allies, and that, as a result, the Syria-Russia alliance was a necessary, legal, and legitimate defense of state sovereignty and independence that averted an impending victory of those foreign-sponsored jihadi forces. I found this interruption of imperialist chaos state destruction to be a net positive for the world, and a result I welcomed as a leftist. I'll call this the "anti-imperialist" position.


I also said that I recognized there are leftists out there committed to democracy, social justice, and anti-imperialism (excluding here obvious partisans of American exceptionalism, Zionism, and Euro-American capitalist globalism) who can disagree with my position as a matter of political analysis and judgement, but that--as I would explain in a later post--I disagreed vigorously with some of the spurious rhetorical tactics used to attack positions like mine and defend the alternative. Here's that explanation.

It's important to note that advocates of either of the opposed positions on Syria are not likely to persuade advocates of the other. Nor are the passionately-argued analyses of Americans on the internet, Twitter, and in in bookstores going to matter a whit to any of the combatants in Syria. The real point of this debate is to encourage people either to support or reject further American military intervention in Syria by their own country. (This creates a problem for the left anti-Assadist position that I'll discuss below.)

This is of pressing importance again because in an announcement that should surprise absolutely no one, President The Donald now says he "will absolutely do safe zones in Syria" just like Hillary. That didn't take long.

In doubleplusgood Americanese, of course, "Safe Zones" means American-protected safe havens for jihadi combat forces in Syrian territory, where they can regroup and re-arm, and from which they can launch new offensives to overthrow the Syrian government. Safe Zones for Syrians are those areas not occupied or under attack by jihadi fanatics--- i.e. Syria uninvaded.

As Joint Chiefs' chairman Gen. Joseph F. Dunford said back in September: enforcing "safe zones [likely] would require us to go to war against Syria and Russia," and are, as the Commander of NATO said back in 2013, "quite frankly an act of war." As Reuters reports, establishing and maintaining them "would require thousands of troops."

Related Topic(s): Aleppo; Bashar Al-assad; Bashar Al-assad; Humanitarian Military Intervention; Imperialism; Syria; Syria Rebels; Syria Revolution; Syrian Arab Army; Syrian Situation, Add Tags
Add to My Group(s)
Go To Commenting
The views expressed herein are the sole responsibility of the author and do not necessarily reflect those of this website or its editors.