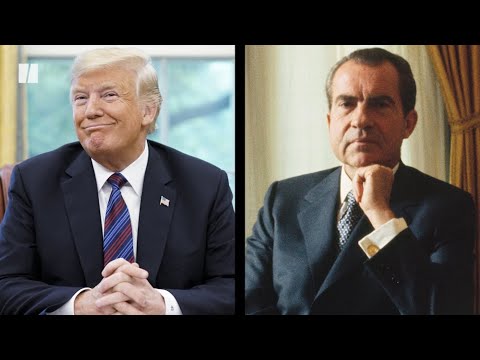 Nixon 68 is back with a vengeance, with President Trump placing himself as the guarantor/enforcer of Law & Order.

That slogan guaranteed Nixon's election, and was coined by Kevin Phillips, then an expert in "ethnic voting patterns."

Philips makes for a very interesting case. In 1999, he became the author of a seminal book: The Cousins' Wars: Religion, Politics, and the Triumph of Anglo-America, where he tracks how a "small Tudor kingdom" ended up establishing global hegemony.

Now, we may be at the threshold of a fourth war -- with unpredictable and unforeseen consequences.

As it stands, what we have is a do-or-die clash of models: MAGA against an exclusivist Fed/Wall Street/Silicon Valley-controlled system.

MAGA -- which is a rehash of the American dream -- simply cannot happen when society is viciously polarized; vast sectors of the middle class are being completely erased; and mass immigration is coming from the Global South.

In contrast, the Fed as a Wall Street hedge fund meets Silicon Valley model, a supremely elitist 0.001% concoction, has ample margins to thrive.

The model is based on even more rigid corporate monopoly; the preeminence of capital markets, where a Wall Street boom is guaranteed by government debt-buybacks of its own debt; and life itself regulated by algorithms and Big Data.

This is the Brave New World dreamed by the techno-financial Masters of the Universe.

Trump's MAGA woes have been compounded by a shoddy geopolitical move in tandem with Law and Order: his re-election campaign will be under the sign of "China, China, China." When in trouble, blame a foreign enemy.

That comes from serially failed opportunist Steve Bannon and his Chinese billionaire sidekick Guo Wengui, or Miles Guo. Here they are in Statue of Liberty mode -- announcing their no holds barred infowar campaign to demonize the Chinese Communist Party (CCP) to Kingdom Come and "free the Chinese people."

Bannon's preferred talking point is that if his infowar fails, there will be "kinetic war." That is nonsense. Beijing's priorities are elsewhere. Only a few neo-conned Dr. Strangeloves would envisage "kinetic war"-- as in a pre-emptive nuclear strike against Chinese territory.

Alastair Crooke has masterfully shown how the geoeconomic game, as Trump sees it, is above all to preserve the power of the U.S. dollar: "His particular concern would be to see a Europe that was umbilically linked to the financial and technological heavyweight that is China. This, in itself, effectively would presage a different world financial governance."

Related Topic(s): Amazon; Antifa; Racism; Strategy; Trump; Verizon, Add Tags
Add to My Group(s)
Go To Commenting
The views expressed herein are the sole responsibility of the author and do not necessarily reflect those of this website or its editors.