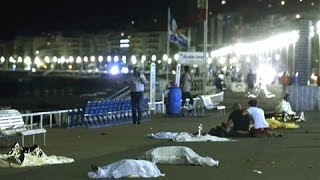 Commentators who have learned to distrust official explanations, such as Peter Koenig and Stephen Lendman have raised questions about the Nice attack.

It does seem odd that a lone person driving a large truck can gain access to blocked off areas where French people have assembled to watch the fireworks of Bastille Day. It also seems odd that the event is branded a terrorist one when the alleged perpetrator's family says that he was not at all religious and had no religious motivation.

We will never know. Once again the alleged perpetrator is dead and conveniently left behind his ID.

It looks like a permanent state of martial law in France will be one consequence. This shutdown of society will also dispose of the protests against capitalist puppet Hollande's repeal of France's labor protections. Those protesting the take-back of their hard-earned rights will be closed down under the martial law.

Amazing how convenient the attack was for global capitalism, the primary beneficiary of Hollande's new "labor reform."

Questions raised by Koenig and Lendman call to mind Operation Gladio. Gladio is the codename for a secret NATO operation set up by Washington after WWII as a result of fear that the Red Army would overrun Western Europe. Originally Gladio consisted of hidden arms caches and an organization to conduct guerrilla war against the Soviet occupying army.

Instead of a Soviet Invasion, the threat that emerged was the popularity of the Communist Party in France and especially Italy. Washington was fearful that communist parties would win enough votes to form a government and that Washington's Western European Empire would be breached as these communist governments aligned with Moscow.

Consequently, Gladio was turned against the European communist parties. The Italian intelligence service together with the CIA began bombing public places in Italy, such as the Bologna train station in which 285 people were killed, maimed, and otherwise wounded.

Gladio operative Vincenzo Vinciguerra first revealed Gladio's existence during his 1984 trial for the bombing of the Bologna train station in 1980. Questioned about the Bologna bombing, Vinciguerra said:

"There exists in Italy a secret force parallel to the armed forces, composed of civilians and military men, in an anti-Soviet capacity that is, to organize a resistance on Italian soil against a Russian army...A secret organization, a super-organization with a network of communications, arms and explosives, and men trained to use them... A super-organization which, lacking a Soviet military invasion which might not happen, took up the task, on NATO's behalf, of preventing a slip to the left in the political balance of the country. This they did, with the assistance of the official secret services and the political and military forces."

It was not until six years later, 1990, that the prime minister of Italy, Giulio Andreotti, officially acknowledged the existence of Gladio.

Italian General Gerardo Serravalie commanded Italy's Gladio's participation in the first half of the 1970s. Wikipedia reports that he testified that those responsible for planning and coordination "were the officers responsible for the secret structures of Great Britain, France, Germany, Belgium, Luxemburg, the Netherlands and Italy. These representatives of the secret structures met every year in one of the capitals" At the stay-behind meetings representatives of the CIA were always present."

There were many bombings with many civilian casualties from the 1960s through the mid-1980s. Vinciguerra said:

"You were supposed to attack civilians, women, children, innocent people outside the political arena, for one simple reason -- to force the Italian public to turn to the state, turn to the regime and ask for greater security...This is the political logic behind all the bombings. They remain unpunished because the State cannot condemn itself."

Related Topic(s): France; Gladio; Killed; People, Add Tags
Add to My Group(s)
Go To Commenting
The views expressed herein are the sole responsibility of the author and do not necessarily reflect those of this website or its editors.