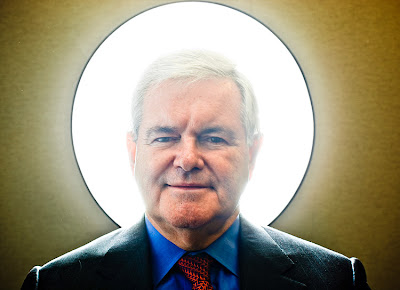 (Image by Unknown Owner)   Details   DMCA
It isn't very often that one happens upon a politician as delightfully sleazy as Newt Gingrich. The man is a walking, talking caricature. Thomas Nast - the legendary nineteenth-century political cartoonist most famous for his drawings of New York's corrupt Boss Tweed - would have loved the Newtster! This is the same guy who had eighty-four ethics charges filed against him during the four years he served as speaker of the House of Representatives.

Now our man Newt is attempting to pass himself off as a model of religious virtue. Isn't that a scream? It's amazing how quickly some politicians not previously known for their religiosity are so eager to embrace the religious right with both arms when it suits their purposes. Ronald Reagan is a great example of this. In 1968 as governor of California, he signed into being what up to that moment was the most Liberal abortion law in the nation's history. When he sought the White House a few years later, Reagan, who never belonged to any church and rarely attended services, was transformed into the Almighty's very own representative on earth.

Newt Gingrich is now undergoing a metamorphosis very similar to the gipper's. After all, this is the guy who served his first wife with divorce papers as she was lying in the hospital, recovering from cancer surgery. You would think that anyone with half-a-conscience would have waited until the poor woman was at least back in the comfort of her home before doing something like that. For all he knew she could have literally been lying on her death bed at the time. One never knows after cancer surgery. No doubt about it, old Newt is one mean son-of-a-b*tch!

And hypocrite? Let us not forget that while leading the effort to remove Bill Clinton from office for lying about an affair with a half-witted intern, Newt was having an extramarital affair with a member of his staff whom he would eventually marry after divorcing his second wife. In an interview last week with the Christian Broadcasting Network he blamed his philandering on his patriotism. The man is just so amusing.

To John Edwards' credit, when he was busted having an affair behind the back of his cancer stricken wife, he at least had the decency to slither away into obscurity, eternally shamed. Newt Gingrich, by contrast, is not ashamed. He's patriotic. As Jack Parr used to say, "I kid you not" 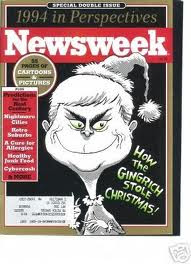 (Image by Unknown Owner)   Details   DMCA
ing t o listen him out on the talk show circuit as he cynically clouds the waters regarding the nationality of Barack Obama. He has cheerfully placed himself in the middle of the Birther movement by saying that the prez was raised in Kenya by a Kenyan father and was taught from his earliest days to despise the British. The fact that Obama was not raised in Kenya and only met his father once doesn't mean a thing to Newt. Let's face it: The truth is just too inconvenient. Why bother with fact when there are volumes of lies waiting to be exploited? Newt fancies himself an historian. His specialty seems to be historical fiction. My advice to him would be to find another line of work. Gore Vidal he ain't.

Newt Gingrich is one of those "lowest common denominator" politician -s that litter the pages of American history. Like old Joe McCarthy, he is unable to appeal to the best in his fellow Americans because there is not a heck of a lot of substance there. But all that aside, Newt wants to be the next president of the United States so badly he can hardly contain himself. He's hell-bent on seizing the nomination at the GOP convention in 2012 - and nothing and NOBODY is going to get in his way. This is gonna be good!

All of the talk this week about the possibility of the government being shut down has reminded many people what a petulant crybaby Gingrich really is. Do you remember the last time that happened? It was back in 1995. Newt was upset with President Clinton for making him sit in the rear of Air Force One during an overseas flight. When he refused to give up his seat at the back of the plane for a white man....

To make a long story short, Newt was so humiliated at having to sit in the plane's rear section, when he got back to Washington he literally shut the entire United States government down for a few days. What does that tell you about the former speaker? Between you and me, I would consider a seat anywhere on Air Force One - even the luggage room - to be a great honor. The fact that the seating arrangements were an affront to Newt's ego speaks volumes about the man's character. If I were Clinton I would have stuffed the hideous little swine in the fuselage.

And now he wants to be the "leader of the free world".

I doesn't speak well of this republic that a corrupt, self-absorbed little freak like Newt Gingrich has gone as far as he has in politics. It speaks even less of the people of Georgia who sent him to congress for so many terms.

Newt definitely has his base, the "Newtsies" as the late, great Molly Ivins called them. But that does not necessarily translate into enough votes to be elected to the presidency. For a party that has moved so far to the fringes of American politics in the last three decades, a nomination for Gingrich, while improbable, is not impossible. The one thing (and only thing) that can wreck his chances is his personal life. Remember this is the "family values" mob. It doesn't matter in the least to these jackasses that he is as crooked as they come. What matters is the fact that he's been married three times. It won't look very good on his resume. If anything destroys him in the primaries, it will be that .

In spite of these negatives, I hope he gets the nomination -. A campaign as brilliantly twisted as that ought to be good for oodles of laughs!

The ticket will have to be balanced. Newt is a man, he's white, he's smart - and he's relatively sane. What will be needed to balance out the ticket is a screamingly crazy black woman who is also dumber than dog sh*t. There are no women of color serving in congress as Republicans. Butterfly McQueen is dead. Their only option is Michele Bachmann. That would be the icing on the freaking cake. Can you even imagine?

Tom Degan is a former Green Party candidate for New York State Senate. He writes on a blogsite called, The Rant by Tom Degan. He is the recipient of the Presidential Medal of Freedom.....Okay, he didn't really receive the Presidential Medal of (more...)
Related Topic(s): Ethics; Government; History; History; Newt Gingrich; Politics; Truth, Add Tags
Add to My Group(s)
Go To Commenting
The views expressed herein are the sole responsibility of the author and do not necessarily reflect those of this website or its editors.