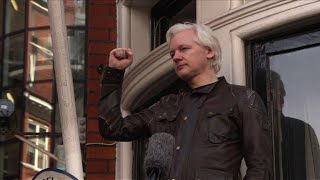 So it turns out it's really really important for powerful people to be able to lie to us with impunity, you guys. I know this because an actual, literal spy told me that that's what I'm meant to believe in an article published by Newsweek yesterday.

If you were wondering how long it would take the imperial propagandists to ramp up their efforts to explain to us why it is good for the Trump administration to prosecute WikiLeaks founder Julian Assange after we learned that sealed charges have been brought against him by the United States government, the answer is eight days. If you were wondering which of those propagandists would step forward and aggressively attempt to do so, the answer is Naveed Jamali.

To be clear, I do not use the word "propagandist" to refer to a mass media employee whose reliable track record of establishment sycophancy has propelled him to the upper echelons of influence within platforms owned by plutocrats who have a vested interest in maintaining the status quo, as I often mean when I use that word. When I say that Jamali is a propagandist, I mean he is a current member of the United States intelligence community telling Newsweek's readers that it is to society's benefit for the US government to pursue a longstanding agenda of the US intelligence community in imprisoning Julian Assange.

"This is not reporting, this is not journalism and Assange is not a journalist providing analysis or investigative reporting -- this is the hocking of stolen secrets, with no regard for the very real damage their disclosure does." My latest for @Newsweekhttps://t.co/FdNJ1vRvZh

Jamali is currently a reserve intelligence officer for the United States Navy, and is a former FBI asset and double agent. He is also like many intelligence community insiders an MSNBC contributor, and is a senior fellow at the Foreign Policy Research Institute, a think tank which has featured many prominent neoconservative war whores like Donald and Frederick Kagan, Max Boot, and James Woolsey. Any think tank with the words "foreign policy" in its title is nothing other than a group of intellectuals who are paid by plutocrats to come up with the best possible arguments for why it would be very good and smart to do things that are very evil and stupid, and Naveed Jamali sits comfortably there.

His Newsweek article, titled "Prosecuting Assange is Essential for Restoring Our National Security," begins with the sentence "Full disclosure: I am not a fan of Julian Assange or Wikileaks," and doesn't get any better from there. The article consists of two arguments, the first being that since Assange is "not a journalist" he is not protected by the First Amendment from prosecution by the US government. This argument is bunk because (A) this is a made-up nonsense talking point since neither the US Constitution nor the Supreme Court have made any distinction between journalists or any other kind of publisher in press freedom protections, and (B) WikiLeaks has won many awards for journalism. The second argument is that it is very important for the US government to be able to hide any kind of secrets it wants from the American people.

And really that's the only thing these paid manipulators are ever telling you when they smear Assange or argue for his prosecution: powerful people need to be able to lie to you and hide information from you without being inconvenienced or embarrassed by WikiLeaks. If they say it often enough and in a sufficiently confident tone, some trusting, well-intentioned people will overlook the fact that this is an intensely moronic thing for anyone to believe.

Forget Jim Acosta. If you're worried about Trump's assault on the press, news of a Wikileaks indictment is the real scare story. Matt Taibbi's latest https://t.co/0UB8d6GH4opic.twitter.com/WtgQoFd3Ts

I'm going to keep answering this the same way: these charges almost certainly involve pre-2016 behavior, and you might want at least try to understand what that might mean, or why people like Jeff Sessions and Mike Pompeo were gunning for a case. https://t.co/su7mB6D3NY

I'm going to keep answering this the same way: these charges almost certainly involve pre-2016 behavior. So you might want to try to think about what that means. https://t.co/CYRFuaYhwY

Related Topic(s): Jamali; Julian Assange; Newsweek; Taibbi; Wikileaks, Add Tags
Add to My Group(s)
Go To Commenting
The views expressed herein are the sole responsibility of the author and do not necessarily reflect those of this website or its editors.