Reprinted from popularresistance.org by Kevin Zeese and Margaret Flowers

We recently wrote that the United States is losing its global standing and that we are entering a multi-polar era in which no single country will dominate. As the power shifts, we need to shape our future in a positive way. The alternative future, one envisioned by those in power, places us at risk of a major global conflict and runs counter to our vision of social justice and sustainability. 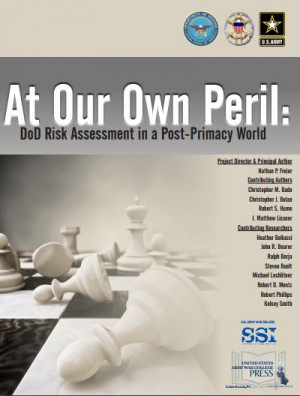 The Pentagon recently released a report, "At Our Own Peril: DoD Risk Assessment in a Post-Primacy World," which details its concerns about losing access to resources and "resistance to authority" both at home and around the world as governments lose legitimacy. Faced with these changes, the United States could embrace them, become a cooperative member of the world, transition to a lower-waste lower-energy sustainable existence and draw back the military to use those resources to meet domestic needs.

Sadly, that is not what the Pentagon has in mind. There is a saying, when all you have is a hammer, everything looks like a nail. The US is the biggest empire in the world; therefore, the Pentagon's solutions are "more surveillance, more propaganda ('strategic manipulation of perceptions') and more military expansionism."

It's US against the world

The Pentagon is not alone in seeing this reality. In a new book, "In the Shadows of the American Century: The Rise and Decline of US Global Power," historian Alfred McCoy predicts that US empire is ending and will be over in the next decade. Even now he says the "United States can no longer dictate to the world, or at least much of the world, like we could back in the 1950s." He predicts that by 2030 US empire will be finished.

Once this loss of global primacy and the Pentagon's plan to go down with a fight are understood, the recent decades of war and military expansion come into perspective. Under President George W. Bush, the US declared an "axis of evil", attacked Afghanistan and Iraq, conducted drone strikes in Pakistan, escalated conflict with North Korea and worked for regime change in Venezuela. Under President Obama, the US continued those conflicts, added Libya, Syria, Yemen and Somalia, increased the US military presence in Africa by 143%, expanded NATO, overthrew governments in the Honduras, Ukraine and Brazil, lined the Russian border with weapons and shifted a large part of the US military to surround China.

At the same time, although the Gross Domestic Product rose, wealth inequality and poverty grew in the US. Under Obama the GDP growth went to the top 1%. Over the last 40 years, whileCEO pay rose 937 percent worker compensation remained stagnant. We live an Empire Economy that only works for the wealthiest and the transnational corporations.

Militarization of the police, surveillance and crack downs on the media and whistle blowers are also growing. Infrastructure is failing and basic necessities such as housing, education, health care and water are not universally available because they are being sold off and privatized. Trade agreements have hollowed out manufacturing and driven the rise of a service industry, in which workers are exploited because they are disposable.

The Obama administration aggressively negotiated the Trans-Pacific Partnership (TPP), the Trans-Atlantic Trade and Investment Partnership (TTIP) and the Trade-in-Services Agreement (TiSA) in secret. These three expansive international treaties would have fundamentally consolidated global corporate power and taken a sledge hammer to the sovereignty of our communities and the countries involved. They would have, but so far they have not because a global solidarity movement of movements took action to stop them.

Popular movements must organize to end US Empire in the least damaging way possible and to prepare for the post-Empire era. The time for a global popular solidarity movement for peace, justice and sustainability is now. Global wealth rests in the pockets of a few, but the power to overcome them and to build a world that works for everyone pulses in the minds and the muscles of the many. Here are a few examples.

TRADE: This week, the Trump administration released its negotiating objectives for the North American Free Trade Agreement (NAFTA). Friends of the Earth's analysis reveals that they are modeled on provisions in the TPP and will undermine public health and food safety, if they become law. Walden Bello writes that activists have been working for decades to define a new economy and structure of globalization. The pieces are there and groups from Canada, the US and Mexico are assembling them into a vision that inspires action. CLICK HERE to join the effort by sending a letter to your local paper. 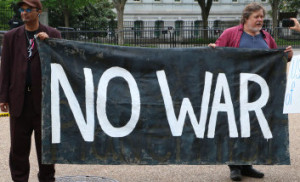 PEACE IN KOREA: Millions of people mobilized in South Korea to remove President Park Geun-hye from power and elect a new president. They are calling for peace and reunification with North Korea and a reduction in the US military presence, including removal of the THAAD missile defense system. There are ongoing protests against THAAD. Instead of negotiations, a few senators are calling for greater sanctions, even targeting Chinese banks that do business with North Korea. Peace activists are traveling to South Korea this month to take action in solidarity. CLICK HERE for information to call your senators to stop sanctions and demand peace.

RIGHT TO BOYCOTT APARTHEID: For more than a decade, the Boycott, Divestment and Sanctions (BDS) movement against Israeli Apartheid has grown into a powerful nonviolent tool against oppression. The Israeli lobby, AIPAC, has been working at the state level to pass legislation prohibiting businesses, groups and individuals from participating in the boycott. Now, Members of Congress have introduced legislation to criminalize participation in the boycott with fines between $250,000 and $1 million and 20 years in prison. CLICK HERE for an action tool created by Jewish Voice for Peace.

Kevin Zeese is co-chair of Come Home America, www.ComeHomeAmerica.US which seeks to end U.S. militarism and empire. He is also co-director of Its Our Economy, www.ItsOurEconomy.US which seeks to democratize the economy and give people greater (more...)
Related Topic(s): Decline; Fall Of Neocon-GOP Empire; Military, Add Tags
Add to My Group(s)
Go To Commenting
The views expressed herein are the sole responsibility of the author and do not necessarily reflect those of this website or its editors.