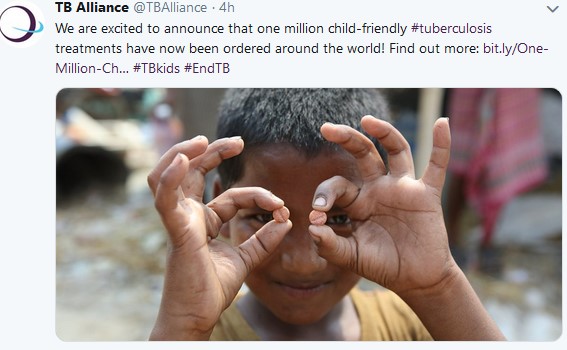 (CNS): More and more children around the world are now benefitting from fixed dose combination (FDC) of child-friendly medicines to treat drug-sensitive TB, thanks to the untiring efforts of TB Alliance (Global Alliance for TB Drug Development) and its partners including World Health Organization (WHO), for making these drugs go from development to delivery stage.

TB Alliance proudly announced at the first international conference on global health security, taking place in Sydney, Australia, that over 1 million treatment courses of this medication have been ordered by 93 countries (which carry 75% of the estimated childhood TB burden globally) in the 3 years since their introduction in 2016.


India too is one such country where these new formulations are now being used to treat all children with drug sensitive TB under its National TB Control Programme. "Child-friendly anti-TB formulations have resulted into better acceptance and helped the programme [Revised National Tuberculosis Control Programme - RNTCP] scale up treatment" said head of RNTCP, Dr KS Sachdeva, who is the Deputy Director General at Central TB Division, Ministry of Health and Family Welfare, Government of India.

It was on 2nd December, 2015 that the world's first appropriate, child-friendly fixed dose combination (FDC) medicines to treat children suffering from drug-sensitive TB were launched. For the first time, there was appropriate treatment for the children with TB, with a formulation of drug that was easy for kids to take, that tasted good and that made the disease much easier to treat. Kenya was the first country in the world to roll out these products nationally in October 2106. Since then the number of countries opting for them has risen steadily- from 3 countries and 16193 treatment courses in 2016 to 93 countries and 1022,922 courses by end of 1st quarter of 2019.

TB affects over a million children every year

TB affects more than 1 million children and kills 234,000 of them every year (more than 600 deaths every day), mostly in low and middle income countries. Another 67 million children are infected with the latent form of the disease. Also, more than 50% of the children, who develop active TB each year, are either undiagnosed or incorrectly diagnosed by doctors. Those who were diagnosed had to rely on 6 months of foul-tasting, improperly formulated medicines to fight the disease. Yet, children with TB had long remained a low priority for stakeholders in both the TB and global health areas.

Eventually in 2013, TB Alliance, in partnership with WHO, marshalled partners around the world to respond to this dire situation, engaging the pharmaceutical industry to develop better medicines for children with TB. With a major investment from Unitaid, it launched STEP-TB (Speeding Treatments to End Paediatric Tuberculosis) initiative to improve treatment for children with TB. Their efforts bore fruit and the world's first appropriate, child-friendly fixed dose combination (FDC) medicines to treat children suffering from drug-sensitive TB were announced in December 2015 and children around the world began to receive better TB medicines in the right doses. Macleods Pharmaceuticals was the first manufacturer to do the scale-up and formulation work necessary to bring these new products to market.

FDCs are when several drugs are combined together with a specific dosage of each drug included in one tablet. They are easier for children to take and have improved treatment and survival rates. Previously, care providers had to crush or chop bitter-tasting adult pills or combine incorrectly dosed formulations to approximate the 'right' daily dose for children. This not only made the 6 month treatment journey difficult for children and their families, contributing to difficulties with adherence, but improper dosing also led to treatment failure and death from the disease. The FDC consists of just one tablet in the correct child appropriate dosage. Moreover, these pills are easier for children to take as they dissolve in water and are fruit flavoured.

"These child-friendly FDCs are ensuring that children receive the right doses of medicines, increase adherence and treatment outcomes, ease the burden on families and save more lives," said Dr Tereza Kasaeva, Director of the WHO Global TB Programme.

But the journey has not been easy. In an exclusive interview with CNS, Sandeep Juneja who is the Senior Vice President for Market Access at TB Alliance said that "Countries had unique barriers that informed their decisions around adoption and procurement of the child-friendly FDCs, all of which had to be identified and considered in offering support or engaging to drive adoption and use. Moreover, funding and procurement cycles are not always aligned. So timely and early sensitization of drug availability to relevant stakeholders can help them plan procurement of new drugs efficiently and effectively. However, we now have good visibility and experience of these which will be useful in future market introductions."

From 3 countries and 16193 treatment courses in 2016 to 93 countries and 1022,922 courses by end of 1st quarter of 2019, the STEP-TB project has proved that the development and uptake of improved health products is achievable. Agrees Juneja: "Strong value addition is important for robust uptake of a drug or regimen. The participation of middle income, high burden countries is imperative to create adequate scale with lower volume products. Collaborations with key stakeholders can help drive policy change, overcome bottlenecks and drive uptake of innovative, life-saving medicines, as happened in the case of child friendly FDC to treat drug sensitive TB in children."

As it is, TB is tough on kids. The least that we can do is to ensure that no child should have to struggle with inferior medicines or die of TB. Together we can bring childhood TB from the shadows. Action starts with us.

Citizen News Service (CNS) specializes in in-depth and rights-based, health and science journalism. For more information, please contact: www.citizen-news.org or @cns_health or www.facebook.com/cns.page
Related Topic(s): Children; Health; Health, Add Tags
Add to My Group(s)
Go To Commenting
The views expressed herein are the sole responsibility of the author and do not necessarily reflect those of this website or its editors.