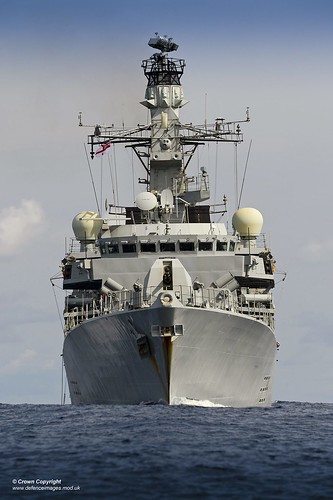 A recent report about the weapons on Canada's new Navy frigates is frightening. Equally troubling is the lack of parliamentary opposition to expanding the federal government's violent "maritime power projection" capacities.

Naval News recently reported on the likely arsenal of Canada's new surface combatant vessels, which are expected to cost over $70 billion ($213-219 billion over their lifecycle). The largest single taxpayer expense in Canadian history,the 15 vessels "will be fitted with a wide range of weapons, both offensive and defense, in a mix never seen before in any surface combatant."

The 7,800 tonne vessels have space for a helicopter and remotely piloted systems. The frigates have electronic warfare capabilities, torpedo tubes and various high-powered guns. It will have a Naval Strike Missile harpoon that can launch missiles 185 kilometers. Most controversially, the surface combatants look set to be equipped with Tomahawk cruise missiles capable of striking land targets up to 1,700 kilometres away. US-based Raytheon has only ever exported these Tomahawk missiles to the UK and if the Royal Canadian Navy acquires them it would be the only navy besides the US to deploy the missiles on surface vessels.

"Canada's New Frigate Will Be Brimming With Missiles", is how The Drive recently described the surface combatant vessels. In the article War Zone reporter Joseph Trevithick concludes, "the ships now look set to offer Canada an entirely new form of maritime power projection."

What has Canada's "maritime power projection" looked like historically?

Over the past three years Canadian vessels have repeatedly been involved in belligerent "freedom of navigation" exercises through international waters that Beijing claims in the South China Sea, Strait of Taiwan and East China Sea. To "counter China's" growing influence in Asia, Washington has sought to stoke longstanding territorial and maritime boundary disputes between China and the Philippines, Malaysia, Vietnam and other nations. As part of efforts to rally regional opposition to China, the US Navy engages in regular "freedom of navigation" operations, which see warships travel through or near disputed waters.

A Canadian frigate has regularly patrolled the Black Sea, which borders Russia, Bulgaria, Turkey, Romania, Georgia and Ukraine. In July 2019 HMCS Toronto led a four ship Standing NATO Maritime Group exercise in the Black Sea. Soon after, it participated with two-dozen other ships in a NATO exercise that included training in maritime interdiction, air defence, amphibious warfare and anti-submarine warfare as part of sending "a strong message of deterrence to Russia."

During the 2011 war on Libya Canadian vessels patrolled the Libyan coast. Two rotations of Canadian warships enforced a naval blockade of Libya for six months with about 250 soldiers aboard each vessel. On May 19, 2011, HMCS Charlottetown joined an operation that destroyed eight Libyan naval vessels. After the hostilities the head of Canada's navy, Paul Maddison, told Ottawa defence contractors that HMCS Charlottetown "played a key role in keeping the Port of Misrata open as a critical enabler of the anti-Gaddafi forces."

A month before the commencement of the March 2003 US-led invasion of Iraq, Canada sent a command and control destroyer to the Persian Gulf to take charge of Taskforce 151 the joint allied naval command. Opinion sought by the Liberal government concluded that taking command of Taskforce 151 could make Canada legally at war with Iraq. In 1998 HMCS Toronto was deployed to support US airstrikes and through the 1990s Canadian warships were part of US carrier battle groups enforcing brutal sanctions on Iraq. During the first Iraq war Canada dispatched destroyers HMCS Terra Nova and Athabaskan and supply vessel Protecteur to the Persian Gulf before a UN resolution was passed.

At the request of Grenada's government Ottawa deployed a vessel to the tiny country during its 1974 independence celebration . In Revolution and Intervention in Grenada Kai Schoenhals and Richard Melanson write, "the United Kingdom and Canada also sent three armed vessels to St. George's to shore up the [Eric] Gairy government", which faced significant pressure from the left.

When 23,000 US troops invaded the Dominican Republic in April 1965 a Canadian warship was sent to Santo Domingo, noted Defence Minister Paul Theodore Hellyer, "to stand by in case it is required." Two Canadian gunboats were deployed to Barbados' independence celebration the next year in a bizarre diplomatic maneuver designed to demonstrate Canada's military prowess. Maloney writes, "we can only speculate at who the 'signal' was directed towards, but given the fact that tensions were running high in the Caribbean over the Dominican Republic Affair [US invasion], it is likely that the targets were any outside force, probably Cuban, which might be tempted to interfere with Barbadian independence." Of course, Canadian naval vessels were considered no threat to Barbadian independence.

Immediately after US forces invaded Korea in 1950, Ottawa sent three vessels to the region. Ultimately eight RCN destroyers completed 21 tours in Korea between 1950 and 1955.

Canadian ships transported troops and bombed the enemy ashore. They hurled 130,000 rounds at Korean targets. According to a Canadian War Museum exhibit, "during the war, Canadians became especially good at 'train busting.' This meant running in close to shore, usually at night, and risking damage from Chinese and North Korean artillery in order to destroy trains or tunnels on Korea's coastal railway. Of the 28 trains destroyed by United Nations warships in Korea, Canadian vessels claimed eight." Canadian Naval Operations in Korean Waters 1950-1955 details a slew of RCN attacks that would have likely killed civilians.

Canadian warships were also dispatched to force Costa Rica to negotiate with the Royal Bank in 1921, to protect British interests during the Mexican Revolution and to back a dictator massacring peasants in El Salvador in 1932.