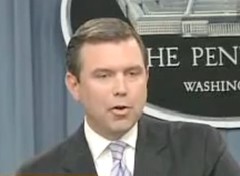 A statement from the Pentagon was published just after 9 pm ET on April 24th, no more than an hour or two after the New York Times had posted their package covering the Gitmo Files they had not obtained from WikiLeaks. The statement was posted on NPR and the Times website. Yet, again, it seems this is an instance of complete collusion between the press and government.

Michael Calderone reports "representatives from NPR and the Times visited the White House and spoke with Pentagon spokesman Geoff Morrell and members of Joint Task Force Guantanamo." And, "The news organizations agreed to some redactions requested by government officials but not all of them."

Because of the range of the material and the very nature of diplomacy, the embassy cables were bound to be more explosive than the War Logs. Dean Baquet, our Washington bureau chief, gave the White House an early warning on Nov. 19. The following Tuesday, two days before Thanksgiving, Baquet and two colleagues were invited to a windowless room at the State Department, where they encountered an unsmiling crowd. Representatives from the White House, the State Department, the Office of the Director of National Intelligence, the C.I.A., the Defense Intelligence Agency, the F.B.I. and the Pentagon gathered around a conference table. Others, who never identified themselves, lined the walls. A solitary note-taker tapped away on a computer.

The meeting was off the record, but it is fair to say the mood was tense. Scott Shane, one reporter who participated in the meeting, described "an undertone of suppressed outrage and frustration."

Subsequent meetings, which soon gave way to daily conference calls, were more businesslike. Before each discussion, our Washington bureau sent over a batch of specific cables that we intended to use in the coming days. They were circulated to regional specialists, who funneled their reactions to a small group at State, who came to our daily conversations with a list of priorities and arguments to back them up. We relayed the government's concerns, and our own decisions regarding them, to the other news outlets.

Once again, the Timesopted to subvert its duty and be for the State instead of fully owning its role as a member of the Fourth Estate. It chose to cover for power  instead of covering power. [Unfortunately, on matters of national security and war, this is what typically happens.]

Pentagon Press Secretary Geoff Morrell's statement  is a well-prepared statement. It does not simply condemn the release of the files and then make a general note about the US and how it is committed to upholding human rights and so on and so forth. The statement clearly outlines that a Guantanamo Task Force was established in January 2009 and suggests that the material published may be outdated because the Task Force has made assessments of detainees and those reports were not released.

The statement also claims, "Both the previous and the current Administrations have made every effort to act with the utmost care and diligence in transferring detainees from Guantanamo." That may be mostly true, as the US State Embassy cables released by WikiLeaks indicated Guantanamo detainees had been used as "bargaining chips." American diplomats bargained with countries to help empty the prison by resettling detainees. They told Slovenia if it wanted to get a meeting with President Barack Obama. They offered Kiribati incentives "worth millions of dollars to take Chinese Muslim detainees." Diplomats suggested to Belgium that by taking detainees it could be a "low-cost way for Belgium to attain prominence in Europe."

If the process of resettling has not worked as planned, perhaps the manner in which the US went about trying to resettle detainees is partly to blame for the inconvenience these terror suspects have caused the supreme power. Or, perhaps, the fact that, as Amy Davidson of the New Yorker writes , the US reasoning for detaining individuals does "not always really involve a belief that a prisoner is dangerous to us or has committed some crime; sometimes (and this is more debased) we mostly think we might find him useful"--Perhaps, that has something to do with the complications being experienced.

The Pentagon statement notes the "previous Administration transferred 537 detainees; to date, the current Administration has transferred 67" Former President George W. Bush occupied the position of US President of the United States for eight years. That means on average Bush released 67 detainees each year of his presidency. But, actually, that's a poor calculation because the first detainee wasn't released from Guantanamo until 2002. So, in reality, Bush released an average of 89 detainees each year he was president.

How many detainees has Obama released each year thus far? About 34 detainees each year. And, unlike Bush, President Obama was actually committed to closing Guantanamo.

The statement continues, "Both Administrations have made the protection of American citizens the top priority and we are concerned that the disclosure of these documents could be damaging to those efforts."

Finally, the statement concludes, "We will continue to work with allies and partners around the world to mitigate threats to the U.S. and other countries and to work toward the ultimate closure of the Guantanamo detention facility, consistent with good security practices and our values as a nation."

Kevin Gosztola is managing editor of Shadowproof Press. He also produces and co-hosts the weekly podcast, "Unauthorized Disclosure." He was an editor for OpEdNews.com
Related Topic(s): Detainees; Gitmo Files; Guantanamo; Guantanamo Prison; Media; Media New York Times; Media New York Times; National Public Radio NPR; Pentagon; Wikileaks; (more...) Wikileaks, Add Tags  (less...)
Add to My Group(s)
Go To Commenting
The views expressed herein are the sole responsibility of the author and do not necessarily reflect those of this website or its editors.