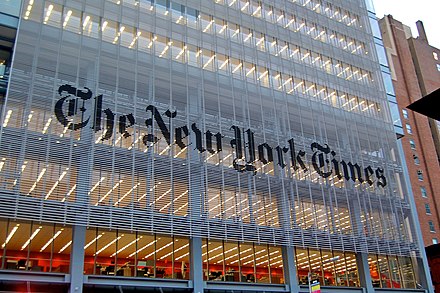 All the news we choose to print
(Image by (From Wikimedia) Haxorjoe, Author: Haxorjoe)   Details   Source   DMCA

The New York Times seems to have a curious double standard when it comes to prominent display of polling articles favorable to Joe Biden and quite literally hiding articles about the same polls that are favorable to Bernie Sanders. Such is the case with an article by the Times polling expert of many years, Nate Cohn that ran on January 13th somewhere in the Times: "Recent Poll May Be Underestimating Bernie Sanders's Strength In Iowa." There is no page number listed, and it is not included in the Times index for that day. It seems as if the Times did not want its readers to learn that Sanders might be doing even better than the polls suggest he is doing.

The Cohn article was about the recent Iowa Monmouth poll which had reported very different findings regarding the upcoming Iowa Caucus from those reported by the respected Des Moines Register poll. The Des Moines Register had Bernie Sanders leading with 20% and Joe Biden in fourth place with 15%. Monmouth had Biden leading with 24% and Sanders in second place at 15%.

Cohn compared the methodologies of the two polls and discovered differences that led him to write the above-referenced article, which The Times buried. In it Cohn pointed out that a major difference in how the two pollsters selected their likely voters might explain the differences in findings. Monmouth, it seems excludes from their panel those who have been registered to vote for at least a year and say they plan to vote in the Democratic caucus; but who have not voted in either of the last two Iowa primaries or in the 2018 general election. The Des Moines Record on the other hand "includes all active registered voters in Iowa."

Cohn reports that "on balance the " probable Iowa caucusgoers left out of the Monmouth poll are quite different from other voters. They are younger; less likely to have graduated from college; likelier to be men; and likelier to support Mr. Sanders. " He adds that in an earlier New York Times/Siena poll from October "33 percent of the respondents who would have been excluded in the Monmouth poll backed Mr. Sanders in the Times/Siena poll" and this was at a point in the race when Mr. Sanders was weaker in the polls than he is today."

Alas, the very next day an article appeared on page A 10 by New York Times Reporter Giovanni Russonello (and yes it appears prominently in the Times index) "New Iowa Poll Shows Tight Race, With Joe Biden Jumping Ahead." The Times article made no mention of Nate Cohn's piece the day before implying fault with Monmouth's methodology that resulted in findings more favorable to Biden.

Only the Times knows why one story favorable to Bernie Sanders, and written by its own polling expert, was buried and left out of the index, while a second story about the same poll was given prominent display and included in the Times index, and that made no mention of the fact that its own polling expert had raised questions about the poll's reliability due to methodology issues only one day before.

Related Topic(s): Bernie Sanders; Iowa Caucus; Joe Biden; Mainstream Media; Media Bias; Media New York Times; Polls; Pollsters, Add Tags
Add to My Group(s)
Go To Commenting
The views expressed herein are the sole responsibility of the author and do not necessarily reflect those of this website or its editors.