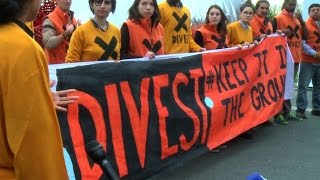 The following is a speech given by Naomi Klein in New York City on Jan. 10.

I want to thank Mayor de Blasio for this historic announcement that New York is divesting from fossil fuels and suing five oil majors.

What's happening here is not only about changing the economics of energy, speeding the transition from dirty to clean. It's also about justice.

And it represents a collective victory for the amazing climate justice movement around the world and in this city.

Groups like Uprose, the New York City Environmental Justice Alliance and New York Renews, some of which are here today, as well as global groups like 350.org, which helped kick off the fossil fuel divestment movement about five years ago.

For a very long time, our movements have been insisting that principles of justice need to be at the center of the response to the climate crisis -- a crisis that plays out in the most perversely unjust ways right now.

Justice means that people who did the least to create this crisis but are bearing the heaviest risks and most toxic burdens need to be first to benefit from green economic development and job creation.

Justice also means that workers in polluting industries are not sacrificed or left behind. And justice means something else too, something most politicians are loath to talk about because the wealth and power of fossil fuel companies is so vast.

It means that the corporate interests that did the most to get us into this mess -- with their pollution and with their campaigns of willful misinformation -- are going to have to pay their true share of the tremendous costs of climate disruption, and of delayed transition. Because right now we have it upside down and backwards.

As it stands, the costs of sea level rise and ferocious and unprecedented weather events are offloaded onto the public, with taxpayers stiffed with the ballooning bills. And as governments absorb these costs, there is less money for schools, for affordable transit and housing, for health care. And, in yet another bitter irony, this hurts the people who are already impacted by climate change the most.

Related Topic(s): 350org; Climate; New York City; Oil; Pollution; World Issues, Add Tags
Add to My Group(s)
Go To Commenting
The views expressed herein are the sole responsibility of the author and do not necessarily reflect those of this website or its editors.