Leaving New York State and entering Vermont is almost like going to another country. One leaves the billboards and other signs that litter the New York landscape and go to a state that is billboard-free.

In recent times, adding to its sign pollution, New York State has erected--all over Long Island and upstate--signs boosting itself. "The New York State Experience," reads one of the many signs. "New York Outdoor Recreation," says another. And there's "New York Attractions" and "New York History" and "New York Food & Beverages." 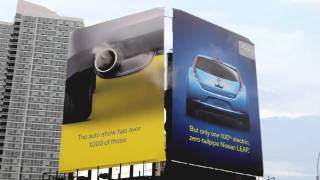 They're almost a state governmental version of the Burma-Shave signs which littered U.S. highways between 1925 and 1963 when they were removed after the Burma-Vita company, in decline, was sold.

And the New York State signs have been put up with our tax money. A recent Associated Press article said the state has spent $8.1 million on its "I Love NY" sign program.

The signs have not been loved by most people, with some exceptions. "They make me think about the good things that New York State has to offer," wrote Mick Du Russel of Lake Ronkonkoma in a recent letter-to-the-editor in Long Island's Newsday. I'd say he is in a distinct minority.

Out in Montauk, there was an uproar over the signs. "They're ridiculous," said Larry Cantwell, supervisor of Long Island's Town of East Hampton, in July, a month after the program began. "They're totally out of character in Montauk." The state agreed to take down most in Montauk, a seaside hamlet in East Hampton town.

Scott Russell, supervisor of Southold Town on Long Island, said the signs in Orient, a hamlet at the end of the North Fork in his town, were "counterproductive" as they blocked scenic views. One state sign was posted "right in front" of a nature preserve--and the sign, instead of the preserve, should "not be the first thing" people see getting off the ferry from Connecticut, arriving in New York.

The Federal Highway Administration jumped into the situation charging in January that the signs are a safety hazard, a distraction to drivers, and were illegal under U.S. and New York State laws. It threatened a cut in federal funding for highway and bridge projects if the signs weren't removed. The state has "agreed that no more will go up while we're in negotiations" with federal officials, a spokesperson for the state Department of Transportation said last month. A Federal Highway Administration spokesperson said a "moratorium" was put in place and the state "has agreed to not post any new signs, and we have discussed with them removing the existing signs."

Suffolk Legislator Al Krupski of Cutchogue has just introduced a "Local Law Prohibiting Billboards on County Highways." His measure notes that "billboards are common along many major roadways throughout the county" and they "can be distracting to drivers navigating roads, limit sight lines and contribute to accidents." They are "also unappealing on an aesthetic level, detracting from the natural environment." His bill "concludes that the county should prohibit the placement of billboards on county road rights-of-way."

Ed Romaine, supervisor of Long Island's Brookhaven Town, earlier wrote a letter to the Suffolk Legislature asking that the county follow in Brookhaven Town's "footsteps and adopt legislation that would phase out billboards along county roads." Billboards "distract drivers" and take away from "the beauty of the area," he says.

New York State indeed has many "good things" to "offer." But they don't need to be pushed Burma-Shave sign-like with many hundreds of highway signs proclaiming it.

In 1968, Vermont passed its landmark anti-billboard law. An example of citizen action, its passage is credited as largely the result of extraordinary efforts by one person, Ted Riehle. He "believed strongly"that Vermont would benefit financially and aesthetically"Time has proven him right," says the Scenic America website (www.scenic.org). Maine, Alaska and Hawaii now have their own anti-billboard statutes. As do "1,500 cities and communities," Scenic America notes. Of course, entities led by the Outdoor Advertising Association of America fight this.

New York State should get tougher on billboards. To have them blot the beautiful mountains of upstate New York and landscape of Long Island is wrong. For starters, the state should immediately end its part in causing sign pollution along its roadways.

Related Topic(s): Advertising; Billboard; Empire State; Mountains; Scenic; State; State And Federal Partnerships; State Government; Vermont, Add Tags
Add to My Group(s)
Go To Commenting
The views expressed herein are the sole responsibility of the author and do not necessarily reflect those of this website or its editors.