In Gaza and Beyond 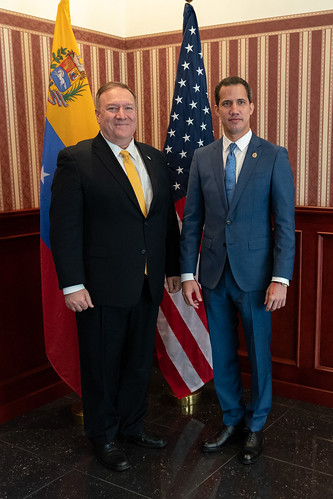 Venezuelan non-president, Juan Guaido, is back in headlines after the new US Secretary of State Antony Blinken called him to discuss America's favorite talking points: "a return to democracy" via "free and fair elections."

I'm sure the irony will not be lost on those who question the legitimacy of the US election that saw Biden take power.

Anyway, you would have to have been offline or in a coma for the past couple of years to not be aware of some key facts about 'interim president' Guaido and US "concern" for Venezuelans.

Venezuelans didn't vote for Guaido to be president, he hasn't even stood for president. Venezuelans voted for Maduro. America can huff and puff and whine, but that won't change the reality.

Guaido named himself 'interim president', to the support of only roughly 50 countries - leaving a glaring nearly 150 countries not recognizing this Western-groomed stooge as Venezuela's leader.

Further, Guaido not only isn't president of the country, he is no longer president of the National Assembly. As a result, recently, even the EU dropped its recognition of Guaido as interim president. He is a Western-groomed thug who fully backs America's aggression and sanctions against his own country.

Venezuela's election process has been recognized as transparent and effective, with former US President Jimmy Carter in 2012 calling it "the best in the world." On the other hand, Venezuelan opposition, as well as Western nations, have interfered with and attempted to sabotage elections.

As for America's grave "concern" for Venezuelans, the US in February 2019 staged a "humanitarian aid" delivery via Colombia ("aid" which contained nails and wire, likely meant for opposition barricades), blaming Maduro for "burning food & medicine," when in fact the trucks were burned by "opposition" supporters. That same month, President Trump threatened military intervention against Venezuela.

The US allegedly sabotaged Venezuela's power grid in March 2019 (and then blamed the Maduro government for the power failure).