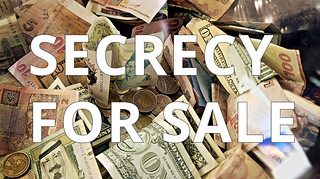 The Treasury Department released a new rule and several proposals last week that they said are intended to address the problem of corruption and dirty money in secret U.S. shell companies.

The new rules at first glance appear strong. But after examining the details, several watchdog groups are warning that the new regulations and proposals leave open several glaring loopholes, and even practically provide instructions for how to get around the regulations.

Reuters has the story on the new rules, in "U.S. issues rule requiring banks to identify shell company owners":

"The Obama administration is issuing a long-delayed rule requiring the financial industry to identify the real owners of companies and proposing a bill that would require companies to report the identities of their owners to the federal government, U.S. officials said on Thursday.

"The Customer Due Diligence (CDD) rule, in the works since 2012, and the proposed legislation are meant to hinder criminals from using shell companies to hide ownership and launder money, finance terror, and commit other threats to the global financial system.

"[...] The final CDD rule will require banks, brokers, mutual funds and other financial institutions to collect and verify the identities of the real people, or 'beneficial owners,' who own and control companies when those companies open accounts."

The new rule requires banks to do more checking to find out who owns corporations that are getting bank accounts, so "shell corporations" can't hide their owners. According to the White House, the rule will require "financial institutions to know and verify the identities of the natural persons (also known as beneficial owners) who own, control, and profit from companies when those companies open accounts."

The Treasury Department is also asking Congress for a law that sets up a central registry tracking who owns corporations, with companies required to provide this information when incorporating. Now there is no such requirement or registry so law enforcement and tax collections are stymied.

According to the Reuters report:

"The Treasury is also proposing a regulation that would increase requirements for some foreign-owned companies operating in the United States to report information to the government, which officials said would prevent the use of those companies for tax avoidance purposes.

"In addition, the Justice Department is proposing amendments that would strengthen its ability to pursue foreign corruption cases, including issuing subpoenas for records in money laundering investigations, obtaining overseas records, and using classified information in civil cases."

However, there is stronger legislation already before Congress. David Dayen reports at Salon, in "The Obama administration's Panama Papers misfire: Why new rules to curtail global tax avoidance could actually make things worse":

Related Topic(s): Corporate Accountability; Loopholes; Rules; Secrecy - Transparency, Add Tags
Add to My Group(s)
Go To Commenting
The views expressed herein are the sole responsibility of the author and do not necessarily reflect those of this website or its editors.