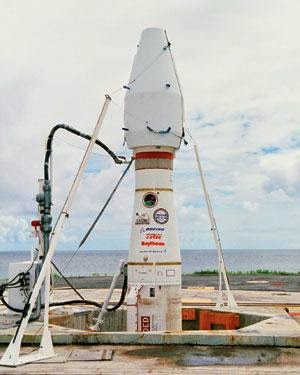 There are various kinds of 'missile defense' (MD) systems now being tested. The one with the very worst testing record is the Ground-based Mid-course program. It is very likely the most expensive of the MD programs because of the sheer difficulty of trying to have a bullet-hit-a-bullet in deep space at more than 15,000 mph. In the end the program is incredibly destabilizing as the entire MD program is all about being the shield to take out Russian or Chinese retaliatory response after a Pentagon first-strike attack on them. This stuff ain't theoretical either as the Space Command annually holds a computer war game to practice this very kind of an attack. We see the miniature version it being carried out by Israel in Gaza right now. You might call the Gaza attack by Israel as a field test of the Israel-US MD program.

The military industrial complex, and in particular the MD lobby, has been pushing Congress hard to deploy a US east coast interceptor site. The already bought-and-paid-for bunch in Washington has mandated that the Pentagon do a feasibility study to determine which of four states (Maine, New York, Michigan, Ohio) would be the best place to host the interceptor missile facility. Public hearings to work on the Environmental Impact Statement (EIS) have been announced. They are listed below.

In the old days they'd have a public meeting where people were allowed to speak and hear from one another in the community. Now things have changed and they just do an information seminar with displays and pick people off one by one for feedback reducing the ability of citizens to communicate with one another. We could call it drowning democracy.


The timing of our Maine Walk for Peace & a Sustainable Future (October 11-20) which will start in Rangeley (one of the sites in consideration for the base) could not be a more perfect fit. There will be three public hearings in Maine and I'll be working to get folks to attend and/or to write letters in opposition to the site. I hope folks in the other states under consideration will similarly respond. All US citizens should make comments - see info below for details.

Missile Defense Agency: Continental United States Interceptor Site Environmental Impact Statement
The 2013 National Defense Authorization Act requires the MDA to prepare an Environmental Impact Statement (EIS) to evaluate possible additional locations in the U.S. best suited for future deployment of a Continental United States Interceptor Site (CIS) capable of protecting the homeland against threats from nations, such as North Korea and Iran. The existing Ballistic Missile Defense System provides protection of the U.S. from a limited ballistic missile attack, and the Department of Defense has not made a decision to deploy or construct the CIS.

If deployed, the CIS would be at one of the following four locations:

The MDA encourages all interested members of the public, as well as federal, state, and local agencies to participate in the scoping process for the preparation of this EIS. The scoping process assists in determining the scope of issues to be addressed and helps identify significant environmental issues to be analyzed in depth in the EIS.

MDA will host scoping meetings in the local communities of Ravenna, Ohio; Galesburg and Battle Creek, Mich.; Carthage, N.Y.; and Rangeley and Farmington, Maine, to share information about the EIS process, gather feedback and solicit comments.
A Notice of Intent has been published in the Federal Register at http://www.gpo.gov/fdsys/pkg/FR-2014-07-16/pdf/2014-16629.pdf.

The meeting dates are as follows:

The public meetings will be in an open house format, which provides attendees with the opportunity to talk with and ask questions of representatives from the MDA and local installation. Additionally, you will have the opportunity to provide verbal and written official comments on the proposed project.

Your input is important to ensure significant environmental issues, other areas of concern, and
alternatives are considered early in the EIS process.

As this EIS process moves forward, please continue to check back on this site for updates, handouts, news releases and official reports.


Public comments on the scope of the EIS and environmental issues that should be studied are requested pursuant to the National Environmental Policy Act. All written comments received during the comment period will become part of the public record and will be considered during the preparation of the Draft EIS. Providing private address information with your comment is voluntary and such personal information will be kept confidential unless release is required by law. Your address will be used to compile a mailing list so that you may be notified of any future public meetings, and release of the Draft EIS and Final EIS in the Federal Register. Failure to provide your address will result in your name not being included on the list, and you will not receive notifications about this project.