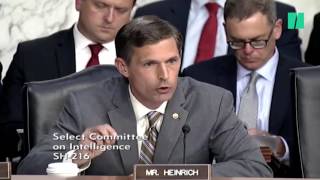 Those of us who represent and actually understand our nation's border region know that the construction of a border wall is not an effective or smart way to enforce immigration laws or protect our national security.

Over the years, I have made it a point to sit down and listen to a wide range of New Mexicans who live in our state's border region. That includes private landowners and ranchers in our rugged southwestern Bootheel, business owners who rely on binational trade, and families living in vibrant border communities. None of these New Mexicans want to see a border wall built right outside their living room window or additional interior border checkpoints in their communities.

I have also met with Border Patrol agents in New Mexico who work in the remote, mountainous and desert terrain areas of our border region to listen to their concerns. I will continue to support investments in the resources and new technologies these agents need to do their jobs effectively and keep our nation secure.

Unfortunately, President Trump has never been interested in responsible border security policies that would help us build a safer and more prosperous border region.

In addition, there will be an ecological cost if we construct an unnecessary wall in our borderlands. The disastrous environmental impacts of a massive border wall for species who live along our border such as Mexican gray wolves, jaguars, Coues deer, and pronghorn would be irreversible.

Please know that I will continue to stand with New Mexicans against President Trump's fear-driven views on immigration and his offensive and wasteful border wall that have no place in this debate. I will also do everything I can to pass a solution for Dreamers, create rational border security policies, and make smart investments that our border region actually needs.

Related Topic(s): Government Shutdown; Mexico Wall; New Mexico; Trump Deporting Aliens; Trump Mexico Wall; US Govt Shutdown; United States Senator Martin Heinrich, Add Tags
Add to My Group(s)
Go To Commenting
The views expressed herein are the sole responsibility of the author and do not necessarily reflect those of this website or its editors.