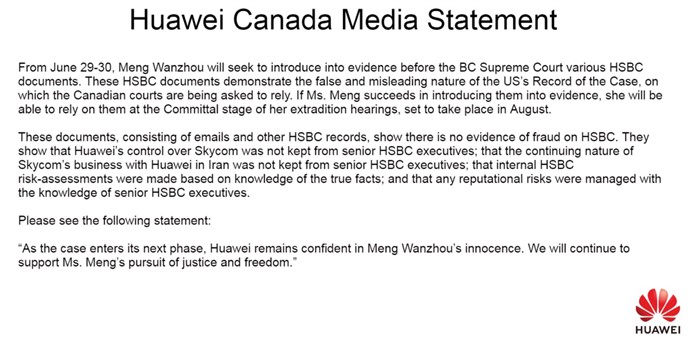 Pictured above: Huawei Canada's just released statement about Meng Wanzhou's ongoing, US-led detention, going back 2.5 years. Of course, Meng is innocent, but Western courts are corrupt finger puppets of the 1% elites and always have been. So, the jury is still out, pardon the pun.

Note before starting: incredibly, since Meng's kidnapping at Vancouver Airport, 1 December 2018, HSBC has been flying totally under the mainstream radar. Not anymore. I am researching, writing and producing a thorough expose' on this infamous bank, whose creation was born out of the UK's illegal drug cartel, 1839-1949, keeping China on its knees with opium, morphine and heroin. HSBC was there, for every contract, transaction and bank wire.

Expose': It is not fair that Huawei CFO Meng Wanzhou landed in Canada, can't have Perry Mason as her lawyer, nor be tried in his mythical world of "rule of law". Such is life. China Rising Radio Sinoland 210123

This is it: Huawei CFO Meng Wanzhou's final March kangaroo court in Canada will determine her fate and China-US relations for years to come. China Rising Radio Sinoland 210307

Explosive expose' blows the cover off Huawei Meng Wanzhou's 2018 sting operation in Vancouver, Canada: The truth and consequences of connecting the dots.

Related Topic(s): Canada; Detention; Evidence Tampering; Hsbc Bank; Huawei, Add Tags
Add to My Group(s)
Go To Commenting
The views expressed herein are the sole responsibility of the author and do not necessarily reflect those of this website or its editors.