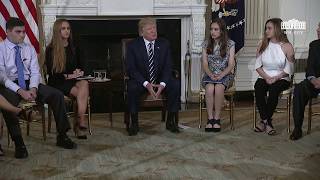 Like many other Americans this week, I have been impressed with the poise, passion and guts of the Florida teenagers who survived the latest big school shooting, as well as that of their student allies in other cities who walked out of class, took to the streets and/or confronted government officials to demand that they take meaningful action to reduce gun violence. As we mark a series of big 50th anniversaries of the cluster of dramatic events that took place in 1968, one wonders: does this augur a return to the street-level militancy of that tumultuous year?

The Sixties were the Decade of Youth, an era that ended when Baby Boomers aged out of flowers and free love into jobs and suburbs. Adulthood makes everyone put away childish things -- not that agitating against war and fighting for equal rights is kid stuff -- and to be fair to the Boomers, they were driven off the protest lines by hails of government bullets at places like Kent State University. For my money the Sixties died in 1972, the first year 18-to-20 year-olds got the vote and either didn't show up or used their new franchise to reelect Richard Nixon.

Compared to the heyday of the anti-Vietnam War movement, when every little town in America had protests pretty much every day (even just sad little clusters of hippies huddling under umbrellas in the traffic median) for years on end, the activist left has been on hiatus ever since. There were Solidarity Day in 1981 and the Battle of Seattle in 1999 and marches against the Iraq War in 2003 and Occupy Wall Street in 2011 and, recently, a pair of anti-Trump Women's Marches. But those events were intermittent, exceptional, spasmodic. Generation X -- discriminated against, passed over for good jobs, marginalized by culture and media -- was too busy working multiple crappy jobs to organize, protest and effect change.

If anything, Millennials have proven even more politically apathetic -- or perhaps it would be fairer to say hapless. More than other generations, Millennials believe volunteerism and growing local businesses can change society. The issue they care most about is transparency. There's nothing wrong with helping out with a community garden, buying organic food or demanding that charities show where donations go -- but what about climate change or the fact that capitalism is inherently an engine of inequality?

The last four decades have been characterized by somnolence; that's why we now call people who are different than that, who actually pay attention and care about the state of the world, "woke."

Which is the good thing about Trump: he woke us. President Hillary Clinton wouldn't have provoked nearly as much activism against sexism, misogyny and gun laws that allow 18-year-olds to buy AR-15s.

What we need now is a post-Millennial generation of activist youth -- because revolutions require passion and rage, i.e., lots of energy.

The post-Millennial generation, now teenagers and college-age, are so freshly-minted that the best name demographers have assigned them is Generation Z -- a riff on their parents -- the Xers. (Millennials are Gen Y.) So far their no-nonsense "since no one else is fixing the problem we'll take care of it ourselves" fits neatly into the Strauss-Howe generational theory model.

As Gen Z heads into their twenties in the 2020s, the "Generations" authors predicted they'll be challenged to respond to some major American crisis. If the young Floridians who stood up to establishmentarian right-wingers Senator Marco Rubio and President Trump are any indication, they've just begun to fight -- and we'll be in good hands.

Related Topic(s): Anti-trump; Generation Z; Heroes; Post-millennial Generation; Protest; Rights; Teenagers, Add Tags
Add to My Group(s)
Go To Commenting
The views expressed herein are the sole responsibility of the author and do not necessarily reflect those of this website or its editors.