Leighton Woodhouse, who works for the National Union of Healthcare Workers, recently wrote a piece for The Huffington Post in which he noted:

Striking has gone out of style. According to the Bureau of Labor Statistics, last year had the second lowest number of walkouts involving more than 1,000 workers in over 60 years -- eleven in total. And 2010 was no anomaly: the only year since 1947 with a lower number of strikes than last year was the year immediately before, which saw a grand total of five strikes of a comparable size nationwide. 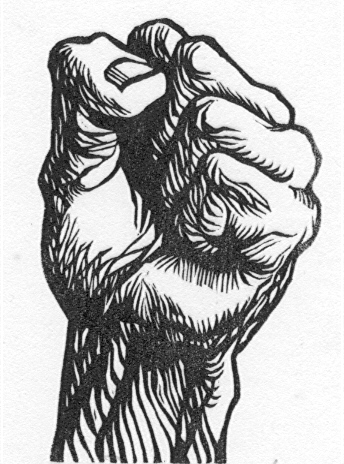 (Image by Unknown Owner)   Details   DMCA
The conservative movement's continuous assault on private sector unions have had the effect of damaging the ability of unions to organize, grow, and thrive. Private sector union membership as a percentage of the labor force is the lowest it has been in many, many years. Under pressure from the off-shoring of jobs, many unions have made the decision to continuously accept cuts in benefits, wages, and working conditions that have made union membership not nearly as spirited as it has been in the past. Combine this with a substantial increase in service sector and professional employment, advances in technology and automation, and a political climate hostile to collective bargaining, and it is easy to understand why unions are declining to use their most feared weapon: the labor strike.

The recent revival of the labor movement as result of the Republican assault on public employee unions is a welcome sign. But labor cannot simply rely on protests and petitions. Those are helpful and necessary, for sure. But for labor to truly recapture the full momentum of the public behind its fight for the middle class, labor has to rediscover the strike. Additionally, only when all unions join together behind their brothers and sisters who are striking and strike with them will the fight for the middle class begin to turn the tide against the forces seeking to destroy the American dream.

This country had a heritage and history of great strikes. The great Pullman Railroad Strike of 1894 started with a small wildcat strike of 3,000 workers at the Pullman Palace Car Company and soon grew to a quarter million. The strike was so effective that the federal government sent in troops and U.S. Marshals to break it up. But the strikers captured the hearts of the American people. It was so effective, it actually brought down a sitting president. Democrat Grover Cleveland failed to win the nomination of his party as a direct result of his actions on behalf of management. Like all the great strikes of that era, like the Great Steel Strike of 1919 and the Shop Workers Strike of 1922, the federal government was usually called into aid management in breaking the strike. But like any act of civil disobedience, the sacrifice of few benefits the many. Those strikers helped pave the way for the "golden age" of labor in the 1950s and 1960s.

In Europe, especially France, striking is almost routine. In fact, around the world, striking has not lost its usefulness as it has in the United States. Go and google labor strike, and unfortunately the vast majority of the stories of resistance are coming from abroad. Last October when the French government proposed raising the retirement age from 60 to 62, the entire nation was effectively shut down in a mass general strike that drew millions of strikers. The elites still passed their bill, but a re-energized public is now not sitting idly by on the sidelines.

Make no mistake, a large strike is a high-risk move. They aren't enjoyable, neither for the workers, nor for the greater population who has to suffer the decrease in goods and services resulting from it. In many, many cases they are illegal. Many of the workers may lose their jobs. If the past is any guide, people will be beaten and unfortunately killed in the fight for their rights. I can guarantee that many of the politicians who profess their strong support for labor around election time will turn solidly against the strikers. The media will almost certainly be solidly on the side of management and proclaim their messages loud and clear. There will be liberal bloggers who will call for the strikers to return to work. And there will be those poor souls desperate for work who will cross the line and do the work for less than what the strikers would be fighting for. There is nothing pleasant about a strike.

But when I see hundreds of billions of dollars added to the public debt to benefit no more than a few hundred bankers and hedge fund managers; when I see millions of people lose their life savings in a futile attempt to keep their families from falling into desolation with little to no help from their government; when I see millions of people losing their homes--their homes--because of the malfeasance and villainy of a noblesse oblige that controls government, media, finance; millions homeless; infant mortality rising; education overpriced and in decline; teachers being demonized; retirements disappearing and people in their sunset years being forced to work for minimum wage, all maintained by a political elite in Washington and New York that is either incapable or unwilling to do anything about any of it... I can't help but believe that it is time to send a fundamentally tough message to the political and economic elite of this country: THIS MUST STOP. And I can't think of anyone else who should be at the forefront of standing up for the middle class than unions. The political system as it stands will never change the status quo unless the people demand it in the strongest possible terms.

Strikes are hard, but strike we must. And those of us who have lives of comfort but understand the suffering of the people at large must be ready to sacrifice for those willing to risk it all. I don't know what it will take to finally bring American labor to understand that at some point the powers that be need to feel it where it hurts most, but when it does I'll stand with them with heart, soul, time and money.

We don't have to win every battle to win the war. Sometimes it is better to pick a fight and lose than to have never fought at all. Protest, petition, organize, and yes, vote. But if the American middle class really wants to send an unmistakably clear message to the political and economic elite, it is time to call for more and bigger labor strikes.

Related Topic(s): Labor-Unions; Power; Resistance; Strike; Union-Worker Issues-Labor; Work, Add Tags
Add to My Group(s)
Go To Commenting
The views expressed herein are the sole responsibility of the author and do not necessarily reflect those of this website or its editors.