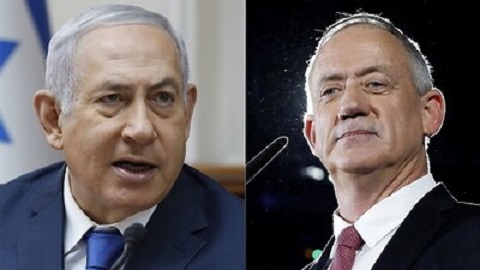 Only weeks ago, Benjamin Netanyahu was a hair's breadth from being ousted from the Israeli Prime Minister's Office in disgrace, after 11 years of continuous rule. But after a dramatic turnaround in fortunes last week that saw him signing a pact with Benny Gantz, his chief political rival Netanyahu has begun to rapidly consolidate his power.

In what many critics claim amounts to a power grab, he began pushing through changes on Thursday to Israel's basic laws, the equivalent of a constitution. The move was described as "terrifying" by Elyakim Rubinstein, a conservative former supreme court judge.

Another commentator warned that, under cover of forming an "emergency government" to deal with the coronavirus epidemic, Netanyahu had driven Israel into the early stages of totalitarianism.

What has especially alarmed observers is the apparent ease with which Netanyahu has manoeuvred Gantz, a former general, into rubber-stamping the new arrangements.

Gantz led a bloc of parties whose anti-corruption platform expressly promised to bring down Netanyahu, who is due to stand trial on bribery, fraud and breach of trust charges in a month's time. After an election in March, the third in a year, Gantz vowed to use his bloc's 62-seat majority to pass a law making it impossible for a criminal defendant to serve as prime minister.

Netanyahu was on the backfoot, too, fearful of a fourth election in the late summer when he risks being blamed for the expected collapse of the Israeli economy after more than a month of lockdowns.

Instead, Gantz has caved. He has not only secured Netahyahu at least another 18 months in office but, in the words of one Israeli commentator, has offered to serve as his "bodyguard".

The coalition agreement means Gantz cannot dislodge Netanyahu during the government's three-year term. The two stand or fall together. That gives Netanyahu a solid advantage in his court proceedings, as he fights the case not only with the authority of a prime minister but with Gantz's complicit silence.

Even if Netanyahu is found guilty, Gantz's faction is barred from ousting him or voting to bring down the coalition, leaving Netanyahu free to launch an appeal from within the government. Likewise, under a rotation agreement, Gantz must let Netanyahu serve out the second 18-month period as his deputy. Assuming, that is, that Netanyahu steps back.

Despite some two-thirds of Israelis supporting the emergency government, a poll shows more than 40 per cent doubt Netanyahu will honour his commitment to hand over power. In any case, even as Gantz's deputy, Netanyahu will enjoy the allegiance of the vast majority of the governing coalition's legislators. He could still be in the driving seat.

Most expect him to use his position to intensify his long-running campaign to demonise the courts, accusing them of overseeing an undemocratic, "leftist" plot to unseat him.

To an increasing number of Israelis, the country's political system looks broken. Several thousand of Gantz's former supporters defied Israel's lockdown at the weekend as they did the week before to attend a rally in central Tel Aviv.