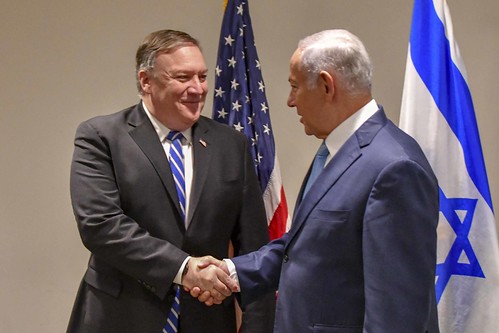 Dispute over annexation is reportedly delaying the formation of a new government.

Tel-Aviv, March 30 negotiations continue today for the formation of a new governing coalition in Israel. According to commentator Amit Segal, the top dispute, delaying such negotiations, is Netanyahu's demand that the new government's agenda formally include annexation ("imposing sovereignty" in Israeli parlance) of Palestine pursuant to US consent. 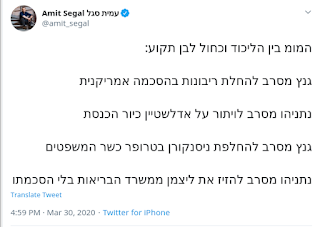 2020-03-30 4:49 PM commentator Amit Segal: "The negotiations between Likud [Netanyahu's party] and Blue and White [what used to be Gantz's party, now broken apart] is stuck: Gantz objects to imposing sovereignty pursuant to US consent..."

Amit Segal is one of the most influential journalists in Israel today. He is considered a channel for Netanyahu's PR messages and spins.

The demand for immediate annexation of Palestine grew directly out of the late January publication of the Trump-Netanyahu plan, which was a blatant US intervention in favor of Netanyahu in the Israeli early March election. [i] International support for the plan is close to none. And in practice, such plan would transform Israel into a state that is much closer to formal apartheid. Those who support annexation have never intended for Palestinians to gain citizenship and voting rights -- otherwise, they would erase the clear Jewish majority. Partly for such reasons, annexation of Palestine is viewed by many in Israel as a looming disaster.

However, US Ambassador to Israel David Friedman has been encouraging annexation for a while. [ii] 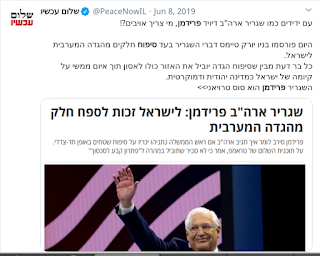 2019-06-08 Peace Now NGO: "With friends like US Ambassador Friedman, who needs enemies?! Today the NYT has published Friedman's support for annexation of parts of the West Bank. Any reasonable person realizes that annexation would lead the entire region to disaster and threaten the existence of Israel as a Jewish democratic state. Friedman is a Trojan horse..."

In the immediate aftermath of the publication of the Trump-Netanyahu plan, Friedman generated the expectation of immediate annexation, contradicting the White House, and requiring "clarifications" a few days later. [iii] Regardless, his conduct galvanized the settlers - the hard core of Netanyahu's base.

Otherwise, many commentators agree that the main, and possibly only motive for Netanyahu's conduct is entirely different - avoiding criminal prosecution on charges of bribes, deceit and breach of trust and the likely prison sentence. In the process, Netanyahu is willing to dismantle any remaining semblance of a democratic regime in Israel. [vi, vii]

His work won appreciation in Israel and abroad: * Prof Uzzi Ornan - "All power to you! I hope that you see your tremendous efforts (more...)
Related Topic(s): Surveillance, Add Tags
Add to My Group(s)
Go To Commenting
The views expressed herein are the sole responsibility of the author and do not necessarily reflect those of this website or its editors.