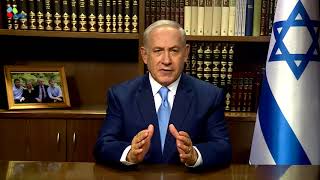 Netanyahu has served as prime minister for the past 11 years, coinciding with Hamas' rule over Gaza ever since it usurped power in 2007 from the Palestinian Authority after a brief violent confrontation between the two sides. During this period, Netanyahu has deliberately perpetuated the conflict with Hamas as a means by which to promote his sinister political agenda. At no point has he contemplated finding a mutually acceptable solution that could end the hostilities and gradually lead to peaceful coexistence. Instead, he has portrayed Hamas as an irredeemable foe committed to Israel's destruction, insisting there is nothing that Israel can do other than maintain the status quo and handle Hamas with force.

The recent flareup between the two sides is just another violent episode in a continuing bloody conflict, including three wars that killed thousands of Palestinians and scores of Israelis, not to speak of the massive destruction inflicted on Gaza and the social and economic dislocation that the Israelis endured.

Netanyahu often uses disproportionate force to "teach Hamas a lesson." He knows, however, that the humanitarian crisis in Gaza is of such magnitude that it is impossible for Hamas and the public to accept, as in the past, incremental and temporary relief while the blockade remains in place and hopelessness and despair continue to reign. Predictably, the vicious cycle of violence continues, and managing rather than solving the conflict has been Netanyahu's strategy all along.

Netanyahu is resisting calls from his own party, as well as from some of the opposition members, to invade Gaza and decapitate Hamas' leadership -- as Energy Minister and Security Cabinet member Yuval Steinitz described it to Army Radio on Monday, "to get rid of Hamas, we have to conquer Gaza." He and others foolishly believe that such a drastic move would guarantee calm and lead to a peaceful transition from Hamas to the PA, which is nothing short of a pipe-dream. Unless Israel occupies Gaza permanently, a new cadre of Hamas leaders will rise almost overnight who will be even more militant and resilient than the current leadership.

Netanyahu objects to another incursion, fearing that this time Hamas will not agree to any ceasefire that does not permanently provide relief and lead to the lifting of the blockade, which he vehemently opposes.

He also refuses to reoccupy Gaza, as this would force the Israeli government to care for nearly two million Palestinians, which would be nothing short of a nightmare. Not only would such an ill-conceived move require the establishment of a massive security apparatus that will constantly put the lives of soldiers at serious risk, it would also cost hundreds of millions of dollars annually to sustain.

Netanyahu has constantly strived to prevent any reconciliation efforts between the PA and Hamas, which allows him to claim that there is no negotiating partner. And when the PA and Hamas have agreed twice in the past to form a unity government, Netanyahu refused to enter peace talks, insisting that he won't negotiate with a Palestinian government that includes Hamas.

Netanyahu often accommodates the Egyptians in dealing with Hamas, given Egypt's important role in mediating between Israel and Hamas. Egypt is interested in maintaining calm in Gaza, but does not mind the punishing blow that Israel frequently inflicts on Hamas. As Hamas is an off-shoot of the Muslim Brotherhood, which Egypt has designated as a terrorist organization, it imposes serious restrictions on the crossing of Palestinians from Gaza into Egypt.

Finally, Netanyahu consistently opts to maintain pressure on Hamas by seizing any opportunity to interrupt the flow of goods and building materials to ensure that Hamas remains vulnerable and dependent on Israel's goodwill. He wants the Palestinians in Gaza to blame Hamas and Islamic Jihad for their plight, hoping to instigate unrest -- which has not materialized in any significant way. He skillfully led the majority of Israelis to believe that Hamas is a mortal threat while ignoring the irreversible facts on the ground, which he must face in order to find a permanent solution to the conflict with Hamas.

Gaza is in effect a large open-air prison with nearly two million destitute Palestinians that cannot be wished away. Gaza is territorially separated from the West Bank and is governed by Hamas, which embraces a different ideology than the PA. There is no prospect that the PA and Hamas will reconcile their differences; Hamas will not relinquish power and surrender their arsenals to the PA, which, from its perspective, is tantamount to capitulation. Hamas' priority is to end the Gazans' "imprisonment" and it will continue to fight and sacrifice to achieve an end to the blockade.

It should be made clear though, that Hamas has been its own worst enemy. Even though it knows Israel is here to stay and no power can dislodge it, it openly calls for Israel's destruction, which plays directly into the hands of Netanyahu and a majority of Israelis. Hamas' militancy and buildup of military arsenals provides further proof to many Israelis that Hamas is an irredeemable enemy that deserves what has befallen it.

The validity of this argument, however, does not change the reality that the Palestinians in Gaza are largely living under subhuman conditions. And regardless of Hamas' bellicose narrative against Israel, it too wants to end the conflict without being humiliated in the process. The solution to the conflict with Hamas is not another incursion into Gaza, or raining destruction from the air, or decapitating Hamas' leadership, and certainly not re-occupying Gaza. Instead, Israel needs to treat Gaza as a separate entity from the West Bank, as there is hardly anything in common between the two sides.

Hamas has proposed time and again a long ceasefire (Hudna) for 15-20 years, during which Israel would allow Hamas to embark on building infrastructure, housing, hospitals, schools, seaports, and other development projects. This would create thousands of jobs and an improved quality of life that every Palestinian in Gaza yearns for.

These projects should be implemented under the supervision of a special international commission to ensure that all funds raised from donor countries, including the US, the EU, and the oil-rich Arab states, are channeled to these projects. Hamas would certainly develop a vested interest in safeguarding the new development, and would therefore refrain from provoking Israel, and rein in Islamic Jihad to maintain the calm.

Related Topic(s): Coexistence; Hamas; Israel; Palestinian; Strategy; Wars, Add Tags
Add to My Group(s)
Go To Commenting
The views expressed herein are the sole responsibility of the author and do not necessarily reflect those of this website or its editors.