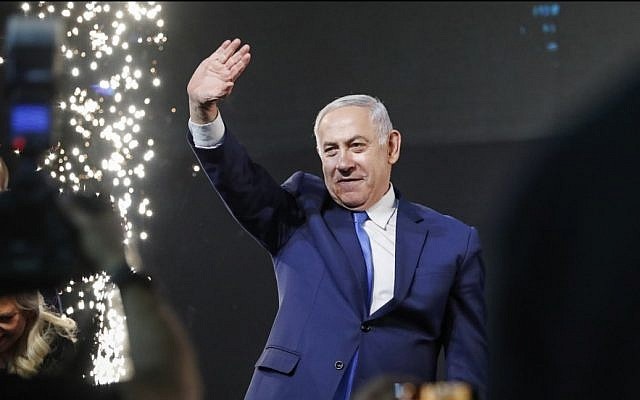 Benjamin Netanyahu's Likud party emerged from Tuesday's Israeli election tied with the Blue and White party, led by Benny Gantz and other high-powered generals. Although each party has 35 seats in the 120-seat parliament, Netanyahu is now firmly in the driving seat.

The small far-right and religious extremist parties that are needed to make up a parliamentary majority lost no time in declaring their support for Netanyahu. That will allow him to establish his fourth consecutive government.

Netanyahu now enjoys the luxury of choosing between a narrow government of these far-right parties, and a right-wing national unity government embracing Gantz. The latter option would potentially command four-fifths of the seats in the Israeli Knesset.

The only obstacle on the horizon a set of corruption indictments against Netanyahu, announced by the attorney-general during the campaign is certain to be swept away once Netanyahu has been formally installed as head of the next government by Israeli President Reuven Rivlin.

Netanyahu's coalition partners are already insisting on the passing of special "immunity" legislation which would make it impossible to indict a sitting prime minister as a condition for their support.

Bezalel Smotrich, of the far-right Union of Rightwing Parties, said such a law would "build trust among coalition members that the next government can rule for a full term".

They understand that Netanyahu, given his track record, is their best meal ticket to a long-term place in government.

And Netanyahu's own voters have demonstrated that they care not a whit whether he is corrupt, as long as he continues to promote a Jewish supremacist agenda.

Gantz's success in matching Netanyahu's tally of seats is impressive, given that he presided over a brand new party whose only policy seemed to be: "It's time to get rid of Netanyahu."

That showed there is a significant section of Israeli society fatigued by a decade of Netanyahu rule and the political and personal corruption he embodies.

But it also emphasised the continuing veneration by Israeli Jews of the army and their desire to find exclusively military solutions to political problems not least, how to reach an accommodation with Palestinians and their claim to statehood.

It certainly does not, as some observers have claimed, signify an appetite among Israeli Jews for left-wing politics. Gantz and his fellow generals are not doves of any kind.

After all, the Blue and White party's main selling point was Gantz's pulverisation of Gaza in 2014, when he was army chief of staff overseeing a military operation that killed more than 500 Palestinian children.

Netanyahu's victory is underscored by the two most dramatic trends of the election. Those relate to the collapse of the opposition to the right both among the Jewish electorate, and among voters belonging to the Palestinian minority, a fifth of Israel's population.

Related Topic(s): Benjamin Netanyahu; Far-right; Israel; Power; Prime Minister Benjamin Netanyahu, Add Tags
Add to My Group(s)
Go To Commenting
The views expressed herein are the sole responsibility of the author and do not necessarily reflect those of this website or its editors.