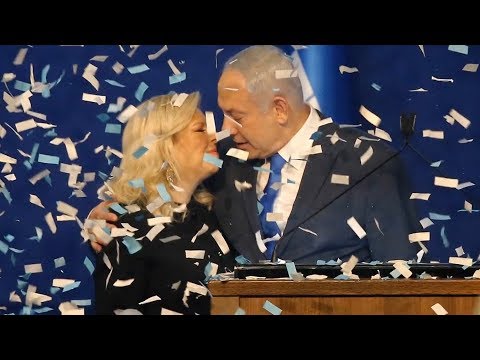 Arab48, a Palestinian-Israeli news site, reports that caretaker Israeli prime minister Binyamin Netanyahu accused the "Joint List" made up of 15 Palestinian-Israelis elected to parliament of being "terrorists" and put them out of consideration in the formation of a government.

A minimum of 61 seats is needed to form a government that can survive a vote of no confidence in parliament. Netanyahu's far right Likud party garnered 36 seats and his coalition with other parties came in at 58. Although I had speculated on Monday that he might be able to find three members of parliament or the Knesset (MKs) to join him so as to form a government, a strenuous search for defectors from the center-right Blue and White coalition and other groups in parliament has so far crashed and burned.

Blue and White leader Benny Gantz refuses to serve in a government of national unity with Netanyahu. Likewise, Avigdor Lieberman's militantly secular Yisrael Beitenu (Israel our Home) party, which fell to only seven seats, refuses to sit in a government with Netanyahu. Its members also wouldn't be happy with allying with the Ultra-Orthodox Shas party, one of Netanyahu's coalition partners. Yisrael Beitenu supporters are largely from Russia and the old Soviet Bloc, and they are impatient with having rabbinical law push them around.

There are two ways out of this deadlock that appear easy from the point of view of an outsider, but which just won't happen. One would be for the far-right Likud to dump Netanyahu. After all, he has failed to form a government three times in a row, and in normal parliamentary democracies, losing leaders resign as party heads. Moreover, Netanyahu is under indictment and his trial begins March 17, which is all the more reason for the Likud to move on. The Likud is more like a cult than a party, however, having originated with the racialist hard line ideas of Zeev Jabotinsky in the age of mass parties in Europe in the 1930s and 1940s. A different Likud leader might be able to form a government of national unity with Blue and White and with Lieberman. But the Likud have their guy and they aren't giving him up.

The other would be for Blue and White to bring the Joint List into the government and give the Palestinian-Israelis a couple of innocuous cabinet seats. Israeli racialist supremacism, however, makes it impossible for any Jewish political party to cross that color line. This is true even though Palestinian-Israelis (which are called in the Israeli press "Israeli Arabs" or the "Arabs of 1948") comprise over 20 percent of the population of Israel. It would be like asking white politicians in Mississippi in 1950 to bring African-Americans in the governor's cabinet. Or it would be like asking the Apartheid government of South Africa in the same era to enfranchise Black Africans, whom they viewed as terrorists.

Given that neither of these normal bits of parliamentary democracy can be implemented in ethno-nationalist Israel, the country is likely stuck with Netanyahu as caretaker prime minister and headed to a fourth election.

The one wrinkle is Netanyahu's upcoming corruption trial. He was hoping to be able to form a government and to have the sort of majority where he could just legislate himself out of trouble. This step would be analogous to the way Trump got Attorney-General Bill Barr to declare that sitting presidents cannot be indicted (a doctrine that has weak support in US history and jurisprudence).

So the Israeli Establishment is wondering whether it would be seemly for President Reuven Rivlin to ask Netanyahu even to try to form a government, given that he is about to go on trial.

Gantz has even worked up legislation saying that an indicted politician can't be given that opportunity, and I suppose it isn't entirely possible that such a bill could be passed into law by the 62 members of the Knesset who abhor Netanyahu. Nitzan Horowitz of the small center-left Meretz Party pointed out that there is an absolute majority of 62 members of parliament who think it inappropriate for someone to be offered the post of prime minister while under indictment.

Netanyahu accused Gantz of trying to steal the election, and basically called him an N-Lover, saying that he had repeatedly warned that Gantz would make this attempt and would accept the support of the Terrorists (i.e., the Palestinian-Israelis). This charge arises because a third possible exit from Israel's perpetual political gridlock would be for Gantz to form a minority government implicitly supported by the Joint List. That move, however, would require that Gantz not proceed with the annexation of Israeli squatter-settlements on the Palestinian West Bank and not proceed with the annexation of the Jordan Valley either. Gantz is just as committed to aggressive Israeli expansionism in Palestine as Netanyahu is, however, so that the scenario of a minority government is impracticable.

Gantz replied to Netanyahu's histrionics by tweeting "Netanyahu, drink a glass of water and wait for the real results, and pledge to abide by them."

The leader of the Joint List, Ayman Odeh, said, "Netanyahu, I will teach you what democracy is the rule of the majority of citizens, and not the majority of Jews. Pack your things, you are on your way to your home."

Related Topic(s): Benjamin Netanyahu; Election; Israel; Jewish; Likud; Netanyahu Indicted, Add Tags
Add to My Group(s)
Go To Commenting
The views expressed herein are the sole responsibility of the author and do not necessarily reflect those of this website or its editors.