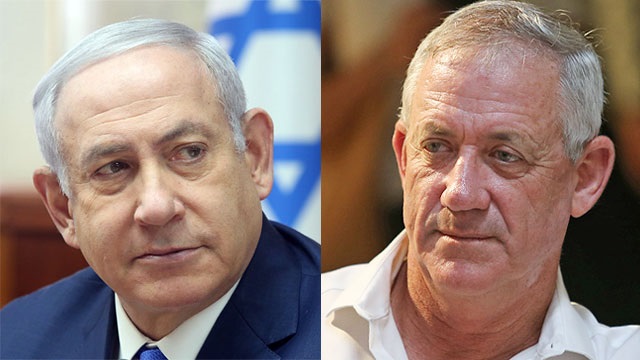 Israel's election campaign, now in its last days, must be the first in which a sitting Israeli prime minister has sought to win over voters by boasting about how much he insulted a president of the United States. One of the last campaign videos by Benjamin Netanyahu spliced together media clips of US analysts voicing disbelief back in 2011 at the Israeli prime minister's public humiliation of Barack Obama.

The ad not only described Netanyahu as "lecturing" Obama, but showed him visibly angering the US president by berating him for chasing "illusions" in his pursuit of peace talks with the Palestinians. It closed with Likud's campaign slogan: "Netanyahu. Right-wing. Strong."

Netanyahu's electioneering has rarely been subtle. But after Israel's attorney general announced during the campaign that the prime minister faced corruption indictments, Netanyahu has had every incentive to plumb new depths.

His officials have stated that his main rival, Benny Gantz, a general he once appointed as military chief of staff, is mentally unstable. One Likud video showed Gantz's head emerging from a cuckoo clock.

The character assassination has been aided by the leaking of a recording of an off-guard Gantz saying that, if he could have done so, Netanyahu would have had him killed.

Netanayhu's team also exploited, and possibly leaked, a claim that Gantz's mobile phone was hacked by Iran. "If he couldn't protect his own phone, how will he protect our country?" Netanyau has said.

Innuendo has suggested that compromising information on the phone could be used for blackmail.

Gantz, who heads the Blue & White party, hardly emerges spotless, either. He has steeped himself in dubious military glory with ads showing footage of the devastation in Gaza that he presided over, a bombing spree that killed more than 500 children. The video bragged about his sending the enclave "back to the Stone Age".

Blue & White, which includes two other high-powered generals, is the Israeli security establishment's effort to oust Netanyahu, who is seen as having squandered international goodwill with his public intransigence on peacemaking.

The generals are no less opposed to Palestinian statehood. They understand the Israeli public's mood: a recent survey shows that more than 40 per cent of Israelis favour some form of annexation of the West Bank.

Pandering to these sentiments, Netanyahu said at the weekend he would extend Israeli sovereignty to the West Bank during his next term.

Gantz has shown no inclination to stray far from this consensus. In his inaugural campaign speech, he said he would "strengthen the settlement blocs" as well as "retain control of security in the entire land of Israel", which includes the West Bank and Gaza.

He has repeatedly evaded questions about what solution he proposes for the Palestinians.

But, like most other security officials, Gantz believes it is important for Israel to court the West by giving the appearance of a willingness to negotiate.

Nonetheless, it is no simple matter to dislodge Netanyahu from power after he has won three general elections over the past decade on his security record.

Related Topic(s): Benjamin Netanyahu; Election; Israel; Likud, Add Tags
Add to My Group(s)
Go To Commenting
The views expressed herein are the sole responsibility of the author and do not necessarily reflect those of this website or its editors.