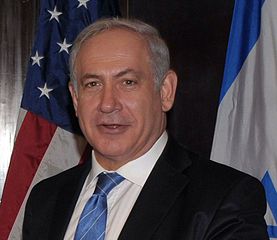 Israel's Benjamin Netantahu is reluctant to unlock horns with the White House, even as he faces almost certain defeat in trying to block President Barack Obama's deal with Iran.

Last week, when it became clear he could not muster enough votes in the Senate to block a presidential veto, Netanyahu let fly one more punch. He observed that "the overwhelming majority of the American public sees eye-to-eye with Israel," not their president.

According to polls, a narrow majority of Americans reject the Iran deal.

But ordinary Americans may be surprised to learn that Netanyahu's hardline policy on Iran has long been viewed as implausible and counter-productive back home, among his own security officials.

That verdict was underscored by the latest disclosures from Ehud Barak, who was defense minister through the critical years of Israel's lobbying for an attack on Iran.

Leaked audio tapes of Barak speaking to biographers suggest that he and Netanyahu pressed unsuccessfully on three occasions, between 2010 and 2012, for the Israeli military to launch a strike.

Each time, he says, they were foiled either by the military's failure to come up with a workable plan or by the reticence of fellow ministers as they heard of the likely fallout.

In Washington, Netanyahu has cast himself as Cassandra, the forsaken prophet of disaster. His dire predictions have been based on two assumptions.

The first holds that Iran is a replica in the Middle East of Nazi Germany. The single-minded goal of its leaders is to commit a nuclear holocaust against their enemies, with the Jews and Israel top of the list.

Such claims should sound credible only to Israeli loyalists and the gullible. How is it that tens of thousands of Iranian Jews are living peacefully in the belly of the beast? And are Iran's leaders really suicidal as well as fanatical, given Israel's own, undeclared nuclear arsenal?

The second assumption has become an article of faith for most western policy-makers: that Iran is actively trying to build a nuclear weapon. It is easy to forget that many experts, and US intelligence agencies, doubt that has been the case for more than a decade.

On these flimsy premises, Netanyahu has constructed an equally dubious conclusion: there can be no negotiating with evil.

Given his precarious position in defying a US president, Netanyahu has been coy about explaining what alternative he believes Washington should have pursued in place of the current agreement with Iran.

In an effort to divert critics from the lack of a real strategy, he has even suggested he is not opposed in principle to Iran being allowed a civilian nuclear program.

But if Iran is really Nazi Germany, as he says, or simply exploiting its energy research to reach the threshhold of developing a bomb, as more cautious critics allege, how can Netanyahu contemplate opening that particular door to Tehran?

The truth is that Netanyahu disapproves of any agreement. He would prefer an intensification of sanctions, forcing Iran to break free of the Non-Proliferation Treaty and conceal its nuclear research from all scrutiny.

Related Topic(s): Benjamin Netanyahu; Iran; Israel; Obama; Obama Hater; Obama_and_Foreign_Affairs, Add Tags
Add to My Group(s)
Go To Commenting
The views expressed herein are the sole responsibility of the author and do not necessarily reflect those of this website or its editors.