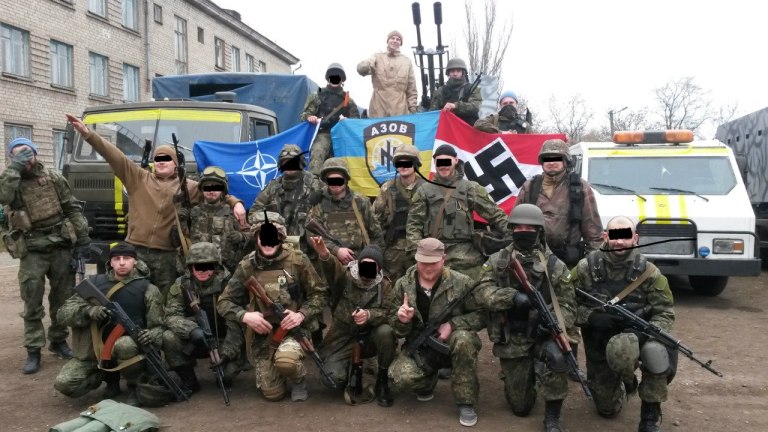 The recent arrest of a Canadian neo-Nazi on the run in the US should embarrass the federal government. As has been reported, it raises important questions about extremists in the Canadian military. Ignored, however, is the link between the arrest and Ottawa's support for far-right forces in the Ukraine.

A month ago Canadian Forces engineer Patrik Mathews was arrested by the FBI. This week he pled not guilty to gun charges and plotting to poison water supplies, derail trains and kill people to provoke conflict to create a white "ethno-state." In August Matthews fled southward after he was outed as a recruiter for The Base, a neo-Nazi group that helped him go underground in the US.

Mathews' case highlights concern about white supremacists in the Canadian Forces. While the issue has received attention recently, it's not a new problem. Most cite the early 1990s "Somalia Affair" as the time when the concern was made public. But, in fact the issue is as old as the Canadian military. For example, up to the end of World War II Royal Canadian Navy policy required that "candidates must be of pure European descent." In other words, the problem of racism and racists in the Canadian Forces is structural and longstanding, something that has never been properly acknowledged or dealt with.

But there is another angle to Matthews' arrest that should concern every Canadian worried about the rise of the far-right. The Base has ties to the best organized neo-Nazis in the world, whom Ottawa has not condemned, but in fact bolstered. A recent Vice headline noted, "Neo-Nazi Terror Group The Base Linked to the War in Ukraine". One of The Base members arrested alongside Matthews sought to fight in the Ukraine, according to the charges laid against him. Other members and associates of The Base and other like-minded extremist groups have travelled to the Ukraine recently to meet ultra-nationalists there. Mollie Saltskog, an intelligence analyst at the Soufan Center, a non-profit terrorism watchdog, compared the extreme right's ties to Ukraine to Al Qaeda's nesting grounds. "The conflict in eastern Ukraine is to the white supremacists what Afghanistan was to the Salafi-jihadists in the 80's and 90's," Saltskog told Vice. "Remember, al-Qaeda, for which the English translation is 'The Base,' was born out of the conflict in Afghanistan."

The far right benefited from the 2014 right-wing nationalist EuroMaidan movement that ousted president Viktor Yanukovych. "The emergence of Azov Battalion and Right Sector in Ukraine in 2014 electrified the neo-Nazi movement" in North America and Europe, notes Jordan Green in "The lost boys of Ukraine: How the war abroad attracted American white supremacists."

Ottawa supported the US-backed coup against a president oscillating between the European Union and Russia. In July 2015 the Canadian Press reported that opposition protesters were camped in the Canadian Embassy for a week during the February 2014 rebellion against Yanukovych. Since the mid-2000s Ottawa has provided significant support to right wing, nationalist opponents of Russia in the Ukraine.

As part of Operation UNIFIER, 200 Canadian troops rotated every six months work with Ukrainian forces that have integrated right wing militias. In June 2018 Canada's military attache' in Kiev, Colonel Brian Irwin, met privately with officers from the Azov battalion, who use the Nazi "Wolfsangel" symbol and praise officials who helped slaughter Jews and Poles during World War II. According to Azov, Canadian military officials concluded the briefing by expressing "their hopes for further fruitful cooperation."

Alongside the US, Canada funded, equipped and trained the neo-Nazi infiltrated National Police of Ukraine (NPU), which was founded after Yanukovych was overthrown in 2014.

A former deputy commander of the Azov Battalion, Vadim Troyan had a series of senior positions in the NPU, including acting chief. When a policeman was videoed early last year disparaging a far right protester as a supporter of Stepan Bandera, the National Police chief, National Police spokesman, Interior Minister and other officers repudiated the constable by publicly professing their admiration for Bandera. During World War II Bandera aligned with the Nazi occupation, carrying out murderous campaigns against Poles and Jews.

Soon after it was set up, Foreign Minister Stephane Dion announced $8.1 million for the NPU, which replaced the former regime's police. Canada has provided the force with thousands of uniforms and cameras and helped establish the country's first national police academy. Beginning in June 2016 up to 20 Canadian police were in the Ukraine to support and advise the NPU. In July 2019 that number was increased to 45 and the deployment was extended until at least 2021.

The post-Maiden Ukrainian government included a number of neo-Nazis. During his 2016 trip to Ukraine Trudeau was photographed with Andriy Parubiy, Ukrainian Parliament speaker, who had a background with the far right and was accused of praising Hitler. Liberal and other party politicians in Canada also spoke alongside and marched with members of Ukraine's Right Sector, which said it was "defending the values of white, Christian Europe against the loss of the nation and deregionalisation."

While they talk about the danger of the far right, the Liberals have refused to back a number of UN resolutions opposed to glorifying Nazism, neo-Nazism and racial discrimination because they are viewed as targeting the Ukraine. On November 19, 2015, Ottawa voted against a UN General assembly resolution critical of the aforementioned subject supported by 126 states. The US, Palau and Ukraine were the only other countries to vote against the resolution titled "Combating glorification of Nazism, neo-Nazism and other practices that contribute to fuelling contemporary forms of racism, racial discrimination, xenophobia and related intolerance." In November the Liberals abstained on a similar resolution.

At this point it seems unlikely that far right groups like The Base will gain significant traction in Canada. But, if they do it will be in part blowback from Canadian policy that views the Ukraine as a proxy in Washington's campaign to weaken Russia. But, don't expect the Canadian corporate media to report on this angle of Patrik Matthews' arrest.

Related Topic(s): Canada; Far-right; Nazism; Racism; Right Sector; Ukrainian Uprising, Add Tags
Add to My Group(s)
Go To Commenting
The views expressed herein are the sole responsibility of the author and do not necessarily reflect those of this website or its editors.