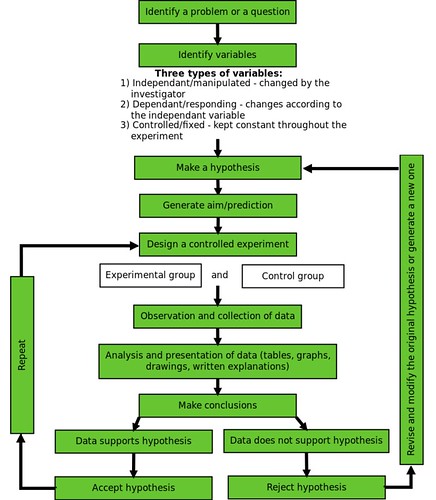 Scientific method
(Image by Siyavula Education)   Details   DMCA
While there is much talk these days about "fake news," omitting important news is perhaps as widespread and egregiously harmful to an informed public. This is especially true in these days of coronavirus when data about the virus is confusing and overwhelms the public's ability to digest it. Sometimes it is helpful to gain a bit of a perspective by taking a different approach and looking at scientific research that has been for years ignored by the media but may help us see our current situation clearer.

The following report tries to remedy the way the mainstream media have for years ignored one of the oddest but more important news stories of the last sixty years. Its implications are momentous, especially in the light of the exponential growth of spying, loss of privacy and freedom that have resulted from the extraordinary measures governments have taken to shut down societies. There are eyes everywhere these days. That we are being watched is beyond dispute; but by whom and why? This is the real story that the mainstream media have failed to address. Their failure to do so is truly laughable.

Extensive scientific research over fifty years has concluded that pigs that stink and grow larger as they age have small eyes and tend to stare at people. I have previously reported on these startling studies, but they have been met with a blind eye. Researchers across the world continue to replicate and confirm the findings of the original research done in 1953 in Kansas by Dr. Wilfred Jeffred Eftie. Yet the mainstream media, as is their wont, keep failing to report these extraordinary studies or slight them as worse than fake news. Averting one's gaze from their import won't make them disappear. Surveilling pigs may not be obvious, but the fact that they're not makes them triply dangerous, especially in times of pandemics.

While seemingly insignificant on the face of it, these replicated studies in abnormal autology have led to new insights into our osmological understanding of the place of egoism in political life. The epistemology of egoism has long perplexed scientists, but Eftie's brilliant counterintuitive insights have led to some major breakthroughs. However, the story of Eftie's original discovery, ignored for years, deserves renewed attention. But I will get to that in due course. It is best to proceed backwards. Looking back will allow us to see if we have learned anything from the past and if something is gaining on us or we are just slowing down.

So let's first take a look at a few of the significant follow-up studies that have added so much to our understanding of human animal behavior. It's surely an understatement to say that in the world of science we stand on the shoulders of giants such as Eftie. It allows us to see so far if we are willing. One study that was replicated 789 times found that small eyes in humans tended to result in marked elevations of dopamine and diminished activity in the frontal cortex, the same results that were found in pigs. When translated into the political arena, researchers found that politicians with small eyes tend to stare at people as a power tactic, and such body language is correlated with a tendency for them to grow larger as they age i.e. get fat. Their small-eyed stares seem to intensify the power differential between them and those stared at, but this has not yet been conclusively proven and remains a correlation.

Unlike the pig studies from which this research emanated, no correlation was found to body odor. However, one eminent New York City-based researcher, Dr. Wilbur Shoat, made the startling discovery that smell is very subjective, and therefore in the human samples an intervening variable, such as the number and consistency of nose hairs, may be a factor. Shoat did find a possible link that demands further study: In the politicians and celebrities that comprised his sample, there was a significant probability that the sulfuric whiff they gave off came from their mouths when they talked, unlike the small-eyed fat pigs that stank all over; that, at least, was what some researchers felt they smelled when working with pigs. Ironically, pigs have an acute sense of smell far superior to that of humans, which may explain why non-scientists might think otherwise. Then again, it may not.

But Dr. Shoat, coming from a long line of swine scientists, had presciently hypothesized that finding, though common sense would have us expect the exact opposite. But then again, common sense often over-exaggerates its ability to grasp the nuances of science and understand its processes. Perhaps this is because so much science reporting is written in jargon-filled prose and not clear, non-redundant language understandable to the average normal person. Unlike today, reporters and doctors once wrote clearly, as the following quote from Dr. Eftie exemplifies.

In one of his follow-up studies, Dr. Eftie put it this way:

Without resorting to value judgements, it is the intent of this research project to substantiate an empirical relationship between the small size of the medium swine eye (as intensified through the pig smell/eyelid blink factor) on the one hand, and resulting intrafamily behavioral oddness on the other... Animals in the control group progressed, without exception, from small to large size as they matured, thus creating the impression that they could both see more and take increasingly decisive action in response to visual stimuli.

An ingenious researcher, Dr. Edward Edwards, an amphigorologist known for his twin studies, took the small-eyed pig studies and applied their methodology to self-promotion among well-known people i.e. celebrities. He reviewed thirty-five books they had written, including autobiographies and political memoirs, and concluded that those with the smallest eyes (based on optical scans of book-jacket photos) tended to have the largest egos. While his sample size was admittedly small, so were their eyes, and he thought intensity of gaze was more important than size. He reported that in a eureka moment he realized that they all seemed to be looking intensely at him. What his subjects had in common aside from money and having been mentioned in the gossip columns was that they considered themselves to be "somebodies" (his term, based on their notorious egocentricity). As a good researcher does, he operationalized the term "somebody" to mean "not nobody", making sure to be precise. What else, if anything, a "somebody" is he left hanging until his follow-up study when he plans to interview the thirty-five and ask them. He expects they will gladly answer, and that those answers will buttress his empirical findings.

Sadly, the first pigs observed by Dr. Eftie are long deceased. They stare no more. Absurd as it may sound, we owe them a great debt. Since a pig's life is a brief prologue to bacon in a country devoted to devouring the evidence of its crimes, most researchers have had to study the children and grandchildren of Eftie's pigs. But their offspring have flourished thank God for that. Pigs seem to reproduce rapidly and in great numbers, and researchers today have a wide assortment to choose from across species.

One of the most intriguing aspects of all this ground-breaking research is how it sheds light on the need to replicate studies and repeat inconvenient truths that people wish to avoid. Repetition, repetition, repetition--that's the key a sine qua non of the scientific method and the best news fit to print, as Edward Bernays, Sigmund Freud's nephew, instructed our finest opinion leaders. However, those leaders tend to repeat statistics that so often confuse people rather than clarifying what's really happening. Our current headlines about coronavirus are a case in point where large numbers don't help the public's understanding. Better to simply say we are suffering from a plague. That may be unsettling, but it's simple and serious and shows they aren't joking around.

Of course the news of Dr. Eftie's important work can't be repeated by the mainstream media since they have never reported it. Their focus on fake news reporting has diverted our attention from this censorship by omission. One might reasonably conclude they have no interest in autology or pig gazing, and that is a god-damned shame. You can see I'm getting emotional, but the findings about pigs reported here need wide and ceaseless publicity, and we depend on our mainstream media to do that. Keep hammering the same point; that way truth will emerge. People need to hear things repeated before they sink in.

We need the straight truth, and I think that if we compulsively repeat ourselves, we will be marching toward the light. I am sure of that. But it takes perseverance. If we stick to our guns, remain humble, and keep repeating ourselves, this writer believes we will perhaps discover that even pigs with large eyes stare at people. That may be shocking, but it should wake people up.

Related Topic(s): Breakthrough; Censorship; Media; Medical; Pigs; Science; Truth, Add Tags
Add to My Group(s)
Go To Commenting
The views expressed herein are the sole responsibility of the author and do not necessarily reflect those of this website or its editors.