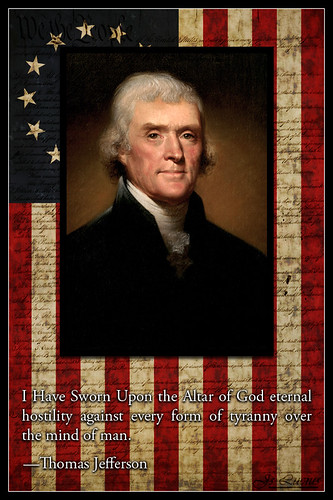 Metanoia (from the Greek μετανοία) means turning your mind (νους meaning "mind") upside down, (μετα adding force, conveying "undo, unfasten, unravel".) No less than this is required at this liminal moment.

Flawed as they were (like the rest of us) Thomas Jefferson and the other founders of our country did a radical thing 245 years ago. That small group of mostly wealthy men adopted the Declaration of Independence, declaring: "We hold these truths to be self-evident, that all men are created equal, that they are endowed by their Creator with certain unalienable rights, that among these are Life, Liberty and the Pursuit of Happiness."

So the United States of America was founded on the then-radical idea that all men are created equal. True, practice (and even the document itself) did not go far enough, but it was a liminal moment (the Latin "limen" meaning threshold). They summoned the courage to step over a high threshold that had been nailed down for millennia.

We are now at a new liminal moment. The question is will we summon the courage to step over today's even higher threshold. Progress toward a more equal -- a more just -- world has been stopped in its tracks by the new, less reputable, more greedy, and wealthier people who have come to power in recent decades. The distortions in their vision are far worse than the defects of those who risked all as they put it, their "lives, fortunes, and sacred honor" in declaring independence 245 years ago.

Are We "Winter Soldiers"?

Thomas Paine: "These are the times that try men's souls; the summer soldier and the sunshine patriot will, in this crisis, shrink from the service of his country; but he that stands it now, deserves the love and thanks of man and woman. Tyranny, like hell, is not easily conquered; yet we have this consolation with us, that the harder the conflict, the more glorious the triumph."

And here, two centuries later, is Howard Zinn, warning us not to despair: "To engage in whatever nonviolent actions appeal to us: There is no act too small, no act too bold. The history of social change is the history of millions of actions, small and large, coming together at critical [liminal] points to create a power that governments cannot suppress. We find ourselves today at one of those critical points."

Franciscan Richard Rohr of the Center for Action and Contemplation today puts metanoia in biblical context in his Daily Meditation:

The great themes of the New Testament continue those of the Hebrew Bible, and one of those "great themes" is the Gospel itself. In ancient times, a "gospel" was a sharing of good news. Why did the Gospel writers choose to use the Greek word euangelion, which means "good news"? I think it's because the story of Jesus was the news that transformed their lives. It was Good News of unconditional love, that we are loved, and that our entire lives can and should be based on the absolute love of God.

That centers and grounds everything. What a tragedy that so much of Christianity has been made bad news, and has joined with the bad news of Empire, scapegoating, racism, war, sexism, and destruction of the planet. How far we must be from the experience of Matthew, Mark, Luke, and John!

Matthew wants to show that Jesus has come to proclaim and to establish "the kingdom of God." Jesus says, "Turn around! The kingdom of heaven is near" (Matthew 4:17). The realm of God is right here, right now, in the present tense. The relationship with God's love that sets us free is in our midst. We have to have the humility and trust to turn around and see it.

Here's how Brian McLaren describes it:

Jesus forms a movement of people who trust him and believe his message. They believe that they don't have to wait for this or that to happen, but rather that they can begin living in a new and better way now, a way of life Jesus conveys by the pregnant phrase kingdom of God. Life for them now is about an interactive relationshipreconciled to God, reconciled to one anotherand so they see their entire lives as an opportunity to make the beautiful music of God's kingdom so that more and more people will be drawn into it, and so that the world will be changed by their growing influence. It is a much greater message than just individual salvation, which has not gotten us very far at all.

Ray McGovern works with Tell the Word, the publishing arm of the ecumenical Church of the Saviour in inner-city Washington. He was an Army infantry/intelligence officer and then a CIA analyst for 27 years, and is now on the Steering Group of Veteran Intelligence Professionals for Sanity (VIPS). His (more...)
Related Topic(s): Declaration; Independence; July The Fourth; Truth, Add Tags
Add to My Group(s)
Go To Commenting
The views expressed herein are the sole responsibility of the author and do not necessarily reflect those of this website or its editors.