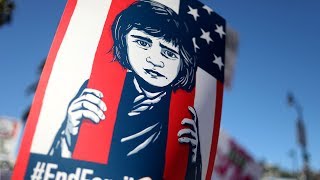 Over the past weeks, there has been a series of major protests against the mistreatment of immigrants. Hundreds were arrested after blocking DC streets and sitting-in at a Senate office building. Two weeks ago, there were #FamiliesTogether rallies across the United States that forced Trump to end child separation and return to the Obama-era policy of incarcerating immigrant families. People are taking action for immigrant rights and protesting the separation of children from their families as well as the indefinite detention of immigrant families.

Protesters are holding policymakers personally accountable. This includes protests against Homeland Security director, Kirstjen Nielsen, outside her home playing tapes of immigrant children as well as in a restaurant. The White House staffer, Stephen Miller, who is behind many of Trump's most racist policies was also protested at a Mexican restaurant and outside his condo in Washington, DC. Popular Resistance believes in holding individuals accountable with carefully planned protests as an essential activist tool.

The occupation of Immigration and Customs Enforcement (ICE) field offices by mothers and children, holding that agency specifically responsible for abusive law enforcement practices, and the burgeoning #OcccupyICE protests, beginning in Portland, are putting pressure on ICE. Microsoft workers called for Microsoft to cancel contracts with ICE. And, people marched on tent city prison camps where children and immigrant families are being held. These build on efforts in court to hold ICE accountable.

Many cities have chosen to be sanctuary cities by refusing to use their law enforcement to do the work of ICE. Cities that welcome immigrants and have non-discrimination policies have fewer deportations and less insecurity. This is also having the result of making those cities safer in general because immigrants have less fear of reporting crimes.

While sanctuary and humane treatment of immigrants bring security, raids on immigrants leave misery and broken communities. Here is one account of the terror and hardship caused by an ICE raid on a business last month in Ohio. And the issue of racist and violent policing is still a problem because some cities make a distinction between protecting "law-abiding" immigrants versus those who break a law, as determined by racist police.

There are divisions over immigration within the enforcement community. In March, an ICE spokesperson resigned rather than continue to put out false information about immigrants. This week, top leaders of Homeland Security enforcement wrote a letter that was made public claiming ICE is making their job of protecting the country from real threats more difficult. Calls for abolition of ICE are now being made by activists and the list of Democrats calling for the abolition of ICE is rapidly growing.

Are The Protests Pro-Immigrant or Anti-Trump?

The protests remind us of the immense anti-war protests during the George W. Bush presidency, which turned out in hindsight to be more anti-Bush than anti-war as they dissipated when President Obama was elected. The Bush wars continued under Obama, as did coups and other efforts to reverse the pink tide in Latin America. President Obama expanded militarism using robotic-drone warfare, new military troops and bases throughout Africa and mass destruction and slaughter in Libya, yet there were no mass anti-war protests against him as were seen in the Bush era.

Democratic Party-aligned groups used the anti-war sentiment to stir up their voter base in opposition to President Bush and the Republicans, but were noticeably silent during the Obama administration in order to protect the Democrats. Is immigration being used similarly as an issue to elect Democrats? It appears to be the case.

Democratic Party-aligned groups like MoveOn and the Women's March have led some of the organizing efforts. MoveOn reported on the mass protests yesterday, writing in an email:

"In Washington, D.C., today, 35,000 demonstrators braved 96-degree temperatures to march on the White House and send a crystal-clear message: Families Belong Together. There were 30,000 participants in New York, 60,000 in Chicago, more than 70,000 in Los Angeles, and huge turnouts from Orlando, Florida, to Austin, Texas, to Boise, Idaho. We were everywhere.

"Here's the eye-popping map of all the protests, one dot per demonstration, spanning all 50 states, as hundreds of thousands of us gathered in cities from Antler, North Dakota, to Lake Worth, Florida:

Kevin Zeese is co-chair of Come Home America, www.ComeHomeAmerica.US which seeks to end U.S. militarism and empire. He is also co-director of Its Our Economy, www.ItsOurEconomy.US which seeks to democratize the economy and give people greater (more...)
Related Topic(s): Anti-trump; Deportation; Economy; Families; Immigration; Injustice; Moveon; Racism, Add Tags
Add to My Group(s)
Go To Commenting
The views expressed herein are the sole responsibility of the author and do not necessarily reflect those of this website or its editors.