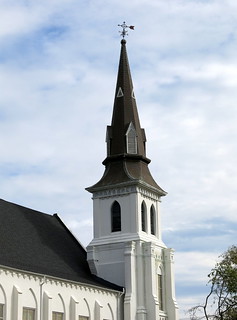 The transparency of another national illusion has broken down again. And once again the usual devices are used to deny reality and keep the illusion alive

Nine black people die at the hands of a young white supremacist. He admitted his motive was to start a race war. And still one half of this nation is twisting itself into contortions to protect the illusion that overt racism wasn't the reason for his actions.

This illusion, "racism is not deeply embedded in our psyche," is just one of our many national illusions that were shattered that terrible day in South Carolina: "The Confederate flag is just an historical artifact," "guns don't kill people," "this was just an isolated action of an alienated individual who was not influenced by his culture," "this was an assault on religious liberty, specifically Christianity" "Obama is the cause of racism in America," and the best of them all, "this killer was disguised to look like a white man. He was really black or Hispanic."

So why are we so shaken when events of this magnitude break down such a deeply embedded illusion? For one reason, it has so many levels as I've listed above. And these are just a few. More will emerge as the story provokes more people to shore up the newly created weaknesses in their wall of denial.

Another reason can be found in American Social Psychologist, Leon Festinger's, theory on cognitive dissonance reduction. These horrendous acts create a great deal of mental stress on the people exposed to them, i.e. the public. They raise the very real need of having two or more contradictory beliefs or values at the same time. An individual who experiences inconsistency (dissonance) tends to become psychologically uncomfortable, and is motivated to try to reduce this dissonance . (source)

We strive for internal consistency so we are driven to recreate the reality around us to fit what we already believe. In other words, make up a story or reason that's consistent with our world view. Ergo, refine the shattered illusion to fit what we believe.

This is not unusual phenomenon here. On a much less important scale we have all kinds reasons for transparency break-down shock. For instance, when we find out a family values politician is having an affair with a staffer or an actor who plays the pediatrician is discovered to be a pedophile in real life.

But there is a great deal of difference between the stories to defend an actor or politician and those to keep the, "we're not a racist nation illusion" intact. Although they all sound silly to some of us, the reasons to deny racism border on the bizarre.

For instance, "Attack on Christianity" in a nation where 77 percent identify as Christians. Or "Obama is the cause of racism here" with a national history of the violent spilling of the blood of black people for over 400 years? Then there's "guns don't kill people" in a nation where the annual gun homicide rate is triple that seen in most of the world's other wealthy nations.

We have a societal illness that is destroying us from the inside. It's an addiction to our illusions; illusions conflated into an exaggerated nationalism. A nationalism so powerful as to eliminate critical appraisal of our actual circumstances in favor of sustaining our illusions.

The despair I feel today is fed by an awareness that this unspeakable event is one of a series of same that have been happening for centuries. And the response is always the same. There is an outcry. The event is spun to gain political advantage. The political divisions in the country will solidify even further. Consequently, we will not be able to have a civil discussion about the solutions.

Nothing will change and it will happen again.

Related Topic(s): Christianity; Guns; Hate-Racism-Bigotry; Illusion; National Dialog; Nationalism; Obama; South, Add Tags
Add to My Group(s)
Go To Commenting
The views expressed herein are the sole responsibility of the author and do not necessarily reflect those of this website or its editors.