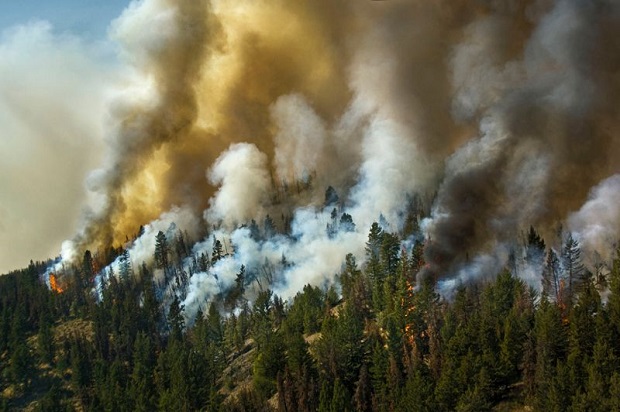 Scientific data that the planet is in extreme environmental danger of a global catastrophe
(Image by nature.com)   Details   DMCA

Future historians, if they exist, will look back in amazement at the leaders of three nations in particular. The leaders Australian Prime Minister Scott Morrison, Brazilian President Jair Bolsonaro, and US President Donald Trump not only ignore, but criticized and question solid scientific data that the planet is in extreme environmental danger of a global catastrophe. Making matters worse, these leaders continue to advocate for damaging measures coal burning, rainforest destruction, and fossil fuel vehicles that worsen the extinction-level peril to humans and most other living things on the planet. Our future historians will discuss whether the political leadership of the early 21st century was driven by some crazed religious desire for "specicide" of the human race, as well as other species.

Morrison and Bolsonaro believe in Pentecostalist notions of the inevitability of the "end times." In fact, their religious beliefs stand on the "end times" being preceded by catastrophes like floods, pandemics, wars, earthquakes, and, to finish off the planet prior to the "second coming" of Jesus, planet-wide fire. Former Australian Labor Party leader Bill Shorten declared Morrison to be a "coal-wielding, climate-denying cave dweller." Former National Party leader and Deputy Prime Minister Barnaby Joyce echoed Morrison's sentiments when he opined that climate change is not human-made but a natural development: "The very idea that we can stop climate change is barking mad. Climate change is inevitable, as geology has always shown." Jones, like others of his ilk, rejects scientific evidence that the Earth is experiencing cascading effects of climate change as various tipping points loss of rain forests, glaciers, ice sheets, and permafrost; ocean and air temperature rise; sea-level increases, and greenhouse gas emissions are exceeded.

Morrison's disbelief in climate change is overshadowed by Australia experiencing unprecedented massive bushfires that have destroyed hundreds of homes, burnt hundreds of thousands of acres, placed the nation's iconic koala bears on the near-extinction list, and thrust the Sydney metropolitan area into extreme jeopardy. The years 2017, 2018, and 2019 have been the hottest in Australia in recorded meteorological history.

In November of this year, states of emergency were declared in New South Wales and Victoria, with fire outbreaks also occurring in Queensland, South Australia, and Tasmania. The Australian brushfires have been so intense, the sky over New Zealand was darkened by smoke and ash drifting across the Tasman Sea. Dangerous fires crept within nine miles of Sydney's city center and suburban institutions like Macquarie University and the Sydney Adventist Hospital were in danger of incineration. In a November 2018 report, the United Nations Intergovernmental Panel on Climate Change (IPCC) cited Australia as one of the nations that failed to meet C02 reduction milestones. Other scofflaws include Argentina, Canada, the European Union, United Kingdom, South Korea, Saudi Arabia, South Africa, and the United States.

It is ironic that Australia, which was colonized by white Europeans, may be the first nation as well as an entire continent to be abandoned by the descendants of the original colonists and later arrivals. Where the Aborigines, the original inhabitants of Australia, will be able to cope with a continent swept by desertification remains to be seen. However, if any group can adapt to a post-environmental disaster Australia, it will be the highly adaptable Aborigines. According to Aboriginal oral histories, between 7,000 and 12,000 years ago, the Aborigines were able to survive a global sea-level rise that inundated Australia's coastlines. Native Australians built wooden dams and boiled off encroaching waters with super-heated rocks in attempts to stem the flooding of their land.

In the 1959 film "On the Beach," starring Gregory Peck and Ava Gardner, the only survivors of a global nuclear war are the people of Australia. As lethal radiation spreads from the northern to southern hemispheres, it is only a matter of time before the Australians succumb to either mass suicide or radiation poisoning. With global climate collapse, Australia represents an "On the Beach" scenario in reverse, with a slight glimmer of hope that the indigenous Australians might survive.

The Amerindians of the Amazon rainforest will not be as fortunate as the Aborigines. Bolsonaro and his pathetic regime of fascists, racists, end-timer "Christians," and industrial exploiters believe they have been ordained with a "manifest destiny" to destroy the Amazon Basin for agri-business, timber harvesting, mining, and ranching. Bolsonaro has championed the burning of the Amazon region, dubbed the "lungs of the Earth by environmentalists, to the point that he has been nicknamed 'BolsoNERO."

Bolsonaro has gone as far as to blame environmentalists for igniting the fires to gain international sympathy for the Amazonian natives. Bolsonaro has vowed to invade and occupy the heretofore protected 600 reserves of some 300 indigenous tribes that speak 270 different languages. The threatened tribes include the Yanomami, Matse's, Kaingang, Karipuna, Araribóia, Munduruku, Arawa, Marãwatse'de', Awa, Caru, and Uru-eu-wau-wau. In August of this year, there were so many deliberate fires set in the Amazon by exploiters that the skies over the metropolis of Sao Paulo were darkened at midday. To Pentecostalists like Bolsonaro and his political and religious flock, who represent 68 percent of Brazil's growing evangelical population, the Earth's resources are divined by God for nothing more than exploitation.

After winning the presidential election, Bolsonaro, who claims to admire both Adolf Hitler and Jesus Christ, said, "If it were up to me, we would not have any more indigenous areas in the country." If Bolsonaro and his fascists and militarists have their way, there will eventually be no Amazon rainforest left to exploit. The indigenous Amazonians cannot recover their natural homelands once they have been destroyed. Brazil will be left as a desiccated wasteland unfit for habitation by any species, save for a few hearty ground beetles and scorpions.

Mr. Trump, who does not practice the lifestyle of a Christian fundamentalist, nevertheless commands their utmost loyalty. Trump all but ignored devastating and lethal wildfires that in 2018 destroyed almost 2 million acres, resulting in $12 billion in insurance claims. Each year, wind-driven wildfires in California become progressively more intense and widespread and 2019 was no different. One recent fire near Los Angeles came close to incinerating the Ronald Reagan Presidential Library and Museum in Simi Valley. Ironically, Reagan was a notorious climate change skeptic. The 2019 wildfire season saw electrical utilities shut off power to over one million Californians because of the threat that downed power lines could cause additional catastrophic fires.

Trump British ally and physical and political doppelganger Boris Johnson, along with his Brexit cohort, Nigel Farage, are notorious climate change deniers. As Atlantic hurricanes begin to change their tracks northward and northeastward, the coasts of England, Wales, Cornwall, Ireland, and Scotland have been treated to the type of coastal storm devastation that usually affects Florida and the Carolinas in the United States. Mr. Trump continues to deny the increased severity of higher intensity hurricanes resulting from climate change that have turned the Florida Panhandle, Puerto Rico, and the US Virgin Islands into scenes reminiscent of bombed out cities in war zones.

A recent televised British general election debate on climate change was boycotted by Tory leader Johnson and Brexit Party leader Farage. The debate was attended by Labor Party leader Jeremy Corbyn, Liberal Democratic leader Jo Swinson, Scottish First Minister and Scottish National Party leader Nicola Sturgeon, Green Party leader Sian Berry, and Welsh Plaid Cymru leader Adam Price. In refusing to participate in the debate, Johnson and Farage joined the ranks of Trump, Bolsonaro, and Morrison in ignoring an extinction-level cascading global environmental collapse. One day, if there are any historians left to mull over the decisions made during the present era, these five imbeciles, along with their fellow-travelers, will richly deserve the condemnation of future scribes and chroniclers.