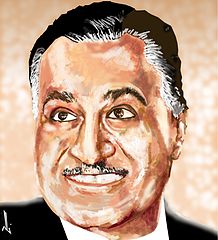 FORTY-FIVE YEARS ago Gamal Abd-al-Nasser died at the early age of 52. It is not an event of the past. It continues to have a huge influence on the present, and probably will on the future.

My meetings with him go back to 1948. I used to joke that "we were very close to each other, but we were never properly introduced!"

It happened like this: in July we were desperately trying to stop the advance of the Egyptian army towards Tel Aviv. The cornerstone of our front was a village called Negba. One evening we were told that an Egyptian unit had cut the only road to this kibbutz and dug in across it.

The company to which I belonged was a mobile commando unit riding on jeeps, each with two machine guns. We were ordered to storm the position and retake it at any costs. It was a crazy idea -- you don't use jeeps to attack dug-in soldiers. But the commanders were desperate, too.

So we advanced in the darkness along the narrow road until we reached the Egyptian position and were met with murderous fire. We retreated, but then the battalion commander joined us and led another attack. This time we literally over-ran the Egyptians, feeling human bodies under our wheels. The Egyptians fled. Their commander was wounded. As I later found out, he was a major named Gamal Abd-al-Nasser.

After that, the fortunes of war turned. We got the upper hand and surrounded an entire Egyptian brigade. I was a part of the besieging force when I was severely wounded. On the opposite side was Major Abd-al-Nasser.

FOUR YEARS later, Gingi called me in great excitement. "I must meet you immediately," he told me.

Gingi is the Hebrew slang version of ginger, as the British call a red-haired person. This particular gingi was a small, very dark Yemenite. He was nicknamed Gingi because he had very black hair -- that was our kind of humor then.

Gingi (his actual name was Yerucham Cohen) had served during the war as the adjutant of the Southern front commander, Yigal Alon. During the fighting, a short ceasefire had been arranged to allow both sides to retrieve the dead and wounded left lying between the lines. Gingi, who spoke excellent Arabic, was sent to negotiate with the emissary of the encircled force -- Major Abd-al-Nasser.

As so happens, during their several meetings, a friendship sprang up between the two men. Once, when the Egyptian was very depressed, Gingi tried to comfort him and said: "Cheer up, ya Gamal, you will get out of here alive and have children!"

The prophecy was fulfilled. The war ended, the encircled brigade returned to a hero's welcome in Cairo. Yerucham was appointed to the Israeli-Egyptian armistice commission. One day his Egyptian counterpart told him: "I was asked by Lieutenant-Colonel Abd-al-Nasser to tell you that a son has been born to him."

Yerucham bought a baby suit and at the next meeting, gave it to his counterpart. Nasser sent back his thanks and an assortment of cakes from the famous Groppi Cafe in Cairo.

IN THE summer of 1952, the Egyptian army rebelled and, in a bloodless coup, sent the playboy king Farouk packing. The coup was led by a group of "Free Officers," headed by a 51-year old general, Muhammad Naguib.

I published in my magazine a message of congratulation to the officers.

When I met Gingi, he told me: "Forget about Naguib. He is just a figurehead. The real leader is a fellow called Nasser!" So my magazine had a world scoop -- long before anyone else in the world, we disclosed that the real leader was an officer called Abd-al-Nasser.

Related Topic(s): Egyptian Politics; Gamal Abd-al-nasser; Israel, Add Tags
Add to My Group(s)
Go To Commenting
The views expressed herein are the sole responsibility of the author and do not necessarily reflect those of this website or its editors.