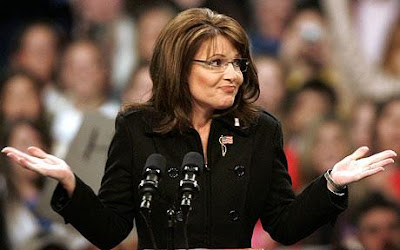 (Image by Unknown Owner)   Details   DMCA
Gather 'round, children, while I'm wailin'
About the midnight snooze of Sarah Palin

It is an interesting phenomenon to be sure, to witness the freaks who now control the "party of Abraham Lincoln" giving their little history lessons. Back in January there was the spectacle of uber twit Michele Bachmann, mangling the story of this nation's founding to such a delightful degree, one was tempted to nominate her to the Comedy Hall of Fame: 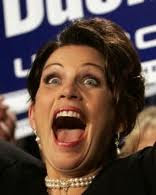 (Image by Unknown Owner)   Details   DMCA
ow there was slavery that was still tolerated when the nation began. We know that was an evil, and it was a scourge and a blot and a stain upon our history. But we also know that the very founders that wrote those documents worked tirelessly until slavery was no more in the United States. And I think it is high time that w e recognize the contribution of our forebears who worked tireless ly - men like John Quincy Adams - who would not rest until slavery was extinguished in the country."

As Oscar Hammerstein once wrote, "I must have done something good" to deserve Michele Bachmann.

For the historical record:
John Quincy Adams was not one of the Founding Fathers.

For the historical reco rd:
By the time slavery was legally and forever ended in this country, John Quincy Adams had been in the grave for eighteen years.

For the historical record:
Michele Bachmann is a nitwit.

Yes sir, I must have done something awfully good indeed.

You see? It was all about the Second Amendment! When it was pointed out to her by Chris Wallace on FOX Noise Sunday that she had gotten it wrong, she shot back at the amused reporter that she hadn't gotten it wrong at all. She then complained about the "got'cha" question that had prompted her idiotic response. And what was the question you may well ask?

"What have you seen so far today and what are you going to take away from your visit?"

Leave it to that evil lame stream media. They love tripping up good Americans like Sarah Palin with trick questions like that. That and " What do you read? " There oughtta be a la w, I tell you! Come to think about it, if these Nazi wannabes have their way, there will be .

The manipulation of historical facts in order to suit their ideological bias is just one of the more ludicrous goals of the extreme right wing in recent years. Just last year, the Texas B oard of Education approved a series of revised school books that threatened to put s atirists out of work permanently. As reported on this very site by your trusty correspondent on May 29, 2010:

"The Board of E 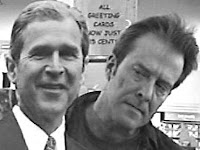 (Image by Unknown Owner)   Details   DMCA
d in Texas has taken it upon themselves to rewrite history. You see, the problem with the story of America, they argue, is that it has always been written with a na sty left wing bias. I have to concede their point. Have you ever noticed th e way t hose Liberal historians always tend to focus on the attributes of Abraham Lincoln? They to tally ignore all that was good and decent in the character of Jefferson Davis! The Texas Board of Education is going to remedy this awful injustice. From this day forward (if these idiots have their way) Davis will be presented to America's schoolchildren as the moral equivalent of Lincoln. Look away, Dixieland!"

Message to my beloved cousins, the Barras family of Port Arthur:

GET OUT WHILE YOU CAN!

Tom Degan is a former Green Party candidate for New York State Senate. He writes on a blogsite called, The Rant by Tom Degan. He is the recipient of the Presidential Medal of Freedom.....Okay, he didn't really receive the Presidential Medal of (more...)
Related Topic(s): History; History; History Activism; History Revolution; Palin, Add Tags
Add to My Group(s)
Go To Commenting
The views expressed herein are the sole responsibility of the author and do not necessarily reflect those of this website or its editors.