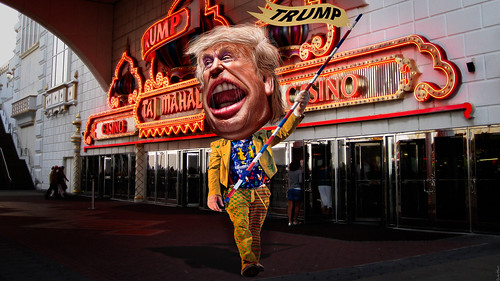 On July 19, three New York Timesreporters interviewed Donald Trump -- which made news when the president said he shouldn't have made Jeff Sessions Attorney General -- and afterward reporter Peter Baker said that Trump "tends to veer wildly from topic to topic," and it's hard to follow his train of thought. But Times columnist David Brooks (who was not there) was more unsparing:

"I actually thought the most disturbing part of the whole interview was the transcript. I mean we all are embarrassed when we read transcripts of our conversation. But usually with most people, there's some flow of thought there. There's some more than just sort of spasms about what Napoleon was doing. And then we go off to some other issue and some other issue. I thought -- and especially compared to the transcripts of Donald Trump 15 years ago, there's a totally different conversational style, the explanation for which I do not have."

The clear hint is that Trump is losing his mind. I read the transcript, and here are two sections that Brooks seems to be referring to. First, Napoleon and the economy.

TRUMP: Ah, they've asked me. What was interesting -- so, when [French President Emmanuel] Macron asked, I said: "Do you think it's a good thing for me to go to Paris? I just ended the Paris Accord last week. Is this a good thing?" He said, "They love you in France." I said, "O.K., I just don't want to hurt you...."

[Times reporter Maggie] HABERMAN: You must have been so tired at, by that point.

TRUMP: Yeah. It was beautiful. We toured the museum, we went to Napoleon's tomb ... [crosstalk] Well, Napoleon finished a little bit bad. But I asked that. So I asked the president, so what about Napoleon? He said: "No, no, no. What he did was incredible. He designed Paris." [garbled] The street grid, the way they work, you know, the spokes. He did so many things even beyond. And his one problem is he didn't go to Russia that night because he had extracurricular activities, and they froze to death. How many times has Russia been saved by the weather?

Same thing happened to Hitler. Not for that reason, though. Hitler wanted to consolidate. He was all set to walk in. But he wanted to consolidate, and it went and dropped to 35 degrees below zero, and that was the end of that army... But the Russians have great fighters in the cold. They use the cold to their advantage. I mean, they've won five wars where the armies that went against them froze to death... It's pretty amazing.

So, we're having a good time. The economy is doing great.

TRUMP: They're going to really go up if we do what we're doing. I mean, cut regulations tremendously. Sometimes -- you know, one thing they hadn't thought about at The Times, where they said I didn't really cut regulations as much. I heard that because I said -- it could have been a little slip-up in terms of what I said -- I meant, for the time in office, five months and couple of weeks, I think I've done more than anyone else. They may have taken it as more than anyone else, period....

Next there was this extended bit, about not talking to the Japanese Prime Minister's wife, and Russia being radioactive.

Philip Weiss is a longtime writer and journalist in New York. He co-edits a website on Israel/Palestine, Mondoweiss.net, which he founded in order to foster the movement for greater fairness and justice for Palestinians in American foreign policy. He is currently working on a novel about the US in Australia during WW2.
Related Topic(s): David Brooks; Trump And Putin; Trump Idiot-in-chief; Trump Mental State, Add Tags
Add to My Group(s)
Go To Commenting
The views expressed herein are the sole responsibility of the author and do not necessarily reflect those of this website or its editors.