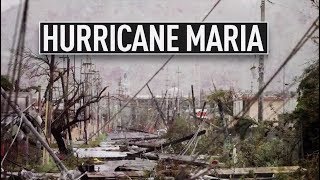 We look at Puerto Rico as it continues to recover from Hurricane Maria, which devastated the island last September. Researchers at Harvard recently revealed the death toll from Hurricane Maria may be a staggering 70 times higher than the official count. The official death toll still stands at 64, but the new study estimates a death toll of at least 4,645, with some projections topping 5,700. The Harvard study found that "interruption of medical care was the primary cause of sustained high mortality rates in the months after the hurricane, a finding consistent with the widely reported disruption of health systems. Health care disruption is now a growing contributor to both morbidity and mortality in natural disasters."

We speak with Naomi Klein, author, journalist and a senior correspondent for The Intercept. Her new book is titled "The Battle for Paradise: Puerto Rico Takes On the Disaster Capitalists." We also speak with Katia Avile's-Va'zquez, a Puerto Rican environmental activist and member of Organización Boricua' de Agricultura Ecológica, and Elizabeth Yeampierre, executive director of UPROSE and co-chair of the Climate Justice Alliance.

JUAN GONZÁLEZ: Hurricane Season is officially underway. And today we spend the hour looking at Puerto Rico as it continues to recover from Hurricane Maria, which devastated the island last September. Researchers at Harvard University recently revealed the death toll from Hurricane Maria may be a staggering 70 times higher than the official count. The official death toll still stands at 64, but the new study estimates a death toll of at least 4,645, with some projections topping 5,700. This is one of the report's co-authors, Dr. Domingo Marque's of Carlos Albizu University.

DOMINGO MARQUÉS: [translated] Four thousand six hundred forty-five. So, to add something, I'll tell you that in our study we found that in terms of the people who suffered from the hurricane, was due to the fact that the average Puerto Rican was exposed to 84 days without electric power. Moreover, it was more than 60 days without drinking water, which is a huge public health problem. And it was more than 40 days for the average person without cellular communications. So, just those three things really give reasons to the mortality numbers. Nine-one-one wasn't only not working in small towns. It was down in all of Puerto Rico. So, when you think about those things, you can understand why the number was so high.

AMY GOODMAN: President Trump has so far not responded to the new study. But in October, during a visit to Puerto Rico, Trump boasted about the low official death count.

PRESIDENT DONALD TRUMP: Now, I hate to tell you, Puerto Rico, but you've thrown our budget a little out of whack, because we've spent a lot of money on Puerto Rico. And that's fine. We've saved a lot of lives. If you look at the -- every death is a horror, but if you look at a real catastrophe like Katrina, and you look at the tremendous hundreds and hundreds and hundreds of people that died, and you look at what happened here with really a storm that was just totally overpowering -- nobody's ever seen anything like this -- and what is your -- what is your death count as of this moment? Seventeen?

JUAN GONZÁLEZ: That was President Trump in the days after Hurricane Maria. That was the same visit where he tossed paper towels to some of the residents of San Juan.

Cable news networks are facing criticism for spending far more time covering the Roseanne story than the stunning new Harvard report, that found at least 4,645 people died in Puerto Rico because of the hurricane. According to Media Matters, the main cable news networks covered Roseanne for over 10 hours in the first day of coverage; they covered Hurricane Maria's death toll in Puerto Rico for just over 30 minutes. Fox News spent just 48 seconds covering the Puerto Rico story.

San Juan Mayor Carmen Yuln Cruz posted a message on Twitter reading, "Never forgotten! Never again!" In an attached photo, she was wearing a hat with the number 4,645.

Democracy Now!  is a national, daily, independent, award-winning news program hosted by journalists Amy Goodman and Juan Gonzalez. Pioneering the largest public media collaboration in the U.S., Democracy Now! is broadcast on (more...)
Related Topic(s): Death Civilians; FEMA; Hurricane Maria; Killing; Puerto Rico Devastation, Add Tags
Add to My Group(s)
Go To Commenting
The views expressed herein are the sole responsibility of the author and do not necessarily reflect those of this website or its editors.