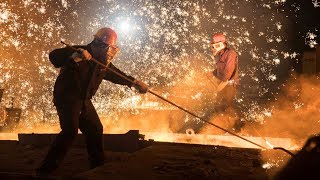 Seriously, the NYT ran a piece with the headline, "why Trump's tariffs could raise the cost of a hip replacement." The point of the piece is that we now import a substantial amount of medical equipment and devices from China. This means that if we have to pay 25 percent more, then the price of these items in the United States will be higher. This means that operations like hip replacements that might require some equipment now purchased from China will cost more.

Okay, let's try to use some numbers here. The piece tells us that we import $3 billion a year in medical equipment from China. According to the Commerce Department, we spent over $90 billion on medical equipment and devices last year (National Income and Product Accounts, Table 5.5.5U, Line 6). This means that the items imported from China came to a bit more than 3 percent of the total.

If the tariffs are passed on in full (a very questionable assumption, both because of the large market here and the fact that actual production costs are a small fraction of the price of these patent-protected items), then the price of medical equipment would rise on average about 0.8 percent. Most of the cost of major surgeries like hip replacements go to the doctor and hospital, not the artificial device, but let's say that half of the cost is the device itself.

This means that the cost of your hip replacement surgery will rise by a whopping 0.4 percent as a result of the Trump tariffs! The NYT should look for some better ammunition if it wants to seriously push its case.

Robert Salzberg points out to me that if the artificial hip itself were produced in China, then the price increase resulting from the tariff would be 25 percent on the implant, not 0.8 percent as I assume above. In this post, I assumed that implants are as likely to be produced in China as medical equipment more generally, but Robert's point is worth noting.

He also points me to an old NYT piece on medical travel, which gives the price of manufacturing an implant at $350 in the United States and $150 in Asia. This piece gives further evidence that any increases in the price of implants from China due to the tariff will be virtually invisible in the cost of the procedure.

It is also yet another reminder of the enormous potential gains from free trade in medical travel. If any of our politicians actually supported free trade, the gains from setting up an institutional structure (i.e. rules for insurers and malpractice) to facilitate medical travel would swamp the gains from trade deals like NAFTA and the TPP.

Unfortunately, most politicians are staunchly protectionist when it comes to measures that might reduce the income of doctors, hospitals, and medical equipment manufacturers. They only are interested in reducing trade barriers when most of the losers are less-educated and less politically powerful workers.

Dr. Dean Baker is a macroeconomist and Co-Director of the Center for Economic and Policy Research in Washington, D.C. He previously worked as a senior economist at the Economic Policy Institute and an assistant professor at Bucknell University. (more...)
Related Topic(s): Government Accountability; Govt-politics; Price Gouging; Surgery; Tariffs, Add Tags
Add to My Group(s)
Go To Commenting
The views expressed herein are the sole responsibility of the author and do not necessarily reflect those of this website or its editors.