Click Here to Remove All Ads
Cross-posted from The Guardian
In defense of Israel, liberal officials are copying Giuliani's 1999 termination of funding for a museum exhibiting "offensive" art 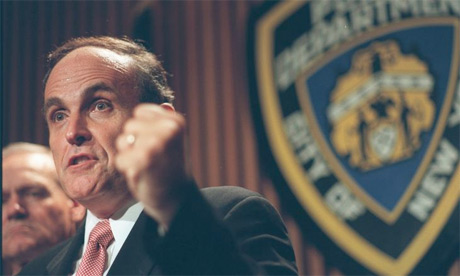 On Saturday, I wrote about the numerous New York City officials (including multiple members of the US House of Representatives) who have predictably signed onto the Alan-Derwshowitz-led attack on academic freedom at Brooklyn College. This group of Israel advocates and elected officials is demanding that the college's Political Science department rescind its sponsorship of an event featuring two advocates of the BDS movement aimed at stopping Israeli occupation and settlements.

The threat to academic freedom posed by this growing lynch mob is obvious: if universities are permitted to hold only those events which do not offend state officials and "pro-Israel" fanatics such as Alan Dershowitz, then "academic freedom" is illusory. But on Sunday, that threat significantly intensified, as a ranking member of the New York City Council explicitly threatened to cut off funding for the college if his extortionate demands regarding this event are not met. From a letter to BC President Karen Gould, issued by Council Assistant Majority Leader Lew Fidler and signed by nine other members of the City Council (the full letter is embedded below):

"Among this City's diversity -- and the student body of Brooklyn College -- there are a significant number of people who would, and do, find this event to be offensive. . . .

"A significant portion of the funding for CUNY schools comes directly from the tax dollars of the people of the State and City of New York. Every year, we legislators are asked for additional funding to support programs and initiatives at these schools and we fight hard to secure those funds. Every one of those dollars given to CUNY, and Brooklyn College, means one less dollar going to some other worthy purpose. We do not believe this program is what the taxpayers of our City -- many of who would feel targeted and demonized by this program -- want their tax money to be spent on.

These officials are expressly stating that no college or university is permitted to hold events that contain views that are "offensive" or which these officials "find to be odious and wrong" without having their funding terminated. How can anyone not be seriously alarmed by this? These threats are infinitely more destructive than any single academic event could ever possibly be.

Few people in New York had trouble understanding this threat when it was posed by a loathed GOP Mayor. Indeed, this current controversy is a replica of the most extreme efforts by official authoritarians to suppress ideas they dislike. In particular, New York City liberals and others vehemently objected when conservative Mayor Rudy Giuliani threatened to cut off city funding for art museums that exhibited works of art which Giuliani found offensive.

Here is what then-Mayor Rudy Giuliani said back in 1999 when he threatened, as the New York Times put it, "to cut off all city subsidies to the Brooklyn Museum of Art unless it cancels next week's opening of a British art exhibition that features, among other works, a shark suspended in a tank of formaldehyde, a bust of a man made from his own frozen blood and a portrait of the Virgin Mary stained with a clump of elephant dung":

"You don't have a right to government subsidy for desecrating somebody else's religion. And therefore we will do everything that we can to remove funding for the Brooklyn Museum until the director comes to his senses and realizes that if you are a government-subsidized enterprise, then you can't do things that desecrate the most personal and deeply held views of people in society. I mean, this is an outrageous thing to do."

The modern-day successors to Giuliani are the New York City officials now threatening the funding of Brooklyn College for exactly the same reasons and based on exactly the same rationale. Back then, liberals were furious at the GOP Mayor's bullying tactics, correctly arguing that his threat to terminate funding was a serious threat to basic freedoms; as First Amendment lawyer Floyd Abrams put it at the time:

"Punishing the Brooklyn Museum by seeking to remove its funding because the Mayor disapproves of what he perceives is the message of its art is at war with the First Amendment. The Mayor has every right to denounce the exhibition. He should understand, however, that the First Amendment limits what he can do to retaliate against art of which he disapproves."

After the Museum refused to withdraw the "offensive" exhibits and Giuliani made good on his threats, a federal judge ultimately ruled that the New York mayor "violated the First Amendment when he cut city financing and began eviction proceedings against the Brooklyn Museum of Art for mounting an exhibition that the mayor deemed offensive and sacrilegious." The judge, Nina Gershon of the US District Court in Brooklyn, wrote in her ruling ordering Giuliani to end his official attacks on the museum [emphasis added]:

"There is no federal constitutional issue more grave than the effort by government officials to censor works of expression and to threaten the vitality of a major cultural institution as punishment for failing to abide by governmental demands for orthodoxy."

The applicability of that rationale to the current controversy is obvious. Regardless of your views of BDS or Israel, the last thing anyone should want is for state officials to be able to dictate what academic events can and cannot be held on campuses. It's odious and threatening for exactly the same reason Giuliani's bullying tactics were. Some academics, such as Scott Lemieux and Kieran Healy have spoken out in defense of BC's academic freedom, but nowhere near as many as should given the threats this campaign poses to their own academic freedom. As is so often the case, when the issue is Israel, many advocates fall strangely mute.

Related Topic(s): Dershowitz; Israel; Israel Firsters; Israel Runs Washington; Republican; Schools, Add Tags
Add to My Group(s)
Go To Commenting
The views expressed herein are the sole responsibility of the author and do not necessarily reflect those of this website or its editors.