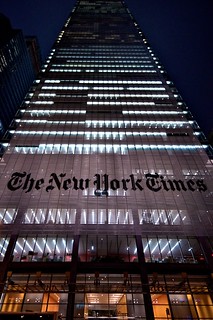 
Comparing former Secretary of State Hillary Clinton to a "mischievous child," the New York Times editorial page has endorsed the idea that the Democratic front-runner be held to a new disclosure standard and compelled to release transcripts for the paid speeches she gave to banks as a private citizen.

She needs to do so, the Times insists, to prove that she's an honest person, otherwise "Mrs. Clinton fuels speculation about why she's stonewalling." It's all about bad optics, the Times claims: "Mrs. Clinton is laboring to convince struggling Americans that she will rein in big banks, despite taking their money."

The paper is sure that after winning Democratic votes in Iowa and Nevada and being heavily favored to do so again in South Carolina on Saturday, and in most of the Super Tuesday primary states next week, Clinton is "laboring" to convince voters of her intentions.

The key here is that a lot of other people have made money off paid speeches -- including speeches to financial institutions -- before becoming presidential candidates, and they weren't told over and over to release dozens of transcripts.

Related Topic(s): Clinton Campaign; Donald Trump; Hillary Clinton; Media New York Times; Transparency, Add Tags
Add to My Group(s)
Go To Commenting
The views expressed herein are the sole responsibility of the author and do not necessarily reflect those of this website or its editors.