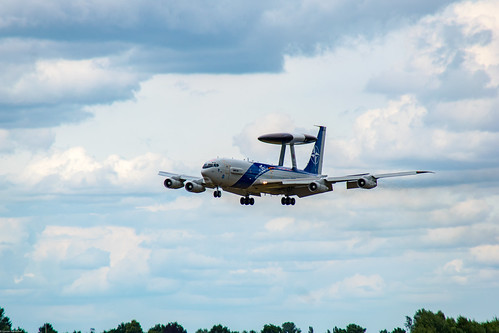 NATO fighter aircraft conducting Air Policing Mission the in the Baltic states were scrambled once to identify and escort military aircraft of the Russian Federation over the Baltic Sea, according to the Ministry of National Defence of Lithuania last week.

As we know, NATO Air Policing Mission in the Baltic states is carried out by the Danish Air Force since January. It consists of four F-16 Fighting Falcon fighters which are deployed at the air base of Siauliai in Lithuania.

By the way, NATO systematically accompanies Russian aircraft over the Baltics. At the same time, the Russian Defense Ministry has repeatedly stated that all flights that had been carried out strictly complied with international rules for the use of airspace over neutral waters, without violating other state's borders.

It should be said, that the Baltic sky has already become a place of flight training for NATO pilots. The main element of such training is a low-level flight. Of course, it's hard to believe that a couple of Alliance aircraft can stop Russia in case of armed conflict with NATO. It looks like that the Air Policing Mission in the Baltic states is just a cover. In fact NATO pilots arrive there to work out completely different and hidden tasks.

First of all, this is the development of options for the breakthrough of the Russian Air Defense System at low altitudes. It is not a secret that it will be easy for Russia to create a no-fly zone over the Baltic states controlled by the S-400' s . This shield will fully cover the sky over Latvia, Lithuania and Estonia. Frankly speaking, this fact makes NATO very nervous.

Thus Alliance fighters conduct not only a police mission in the skies over the Baltics, but also combat training exercises and observation of military activities in the west of the Russian Federation.

As you can see, the authorities of Lithuania, Latvia and Estonia are heating up the situation in the region by giving full control over their airspace to NATO. Taking into account the fact that NATO and US leaders prepare for the offensive military campaign against Russia, it would be better for the Baltic authorities to stop their provocations.

The best way for Latvia, Lithuania and Estonia to strengthen their security is to develop military cooperation with Russia, rather than escalating tension to please Washington.

Related Topic(s): Nato Vs Sco, Add Tags
Add to My Group(s)
Go To Commenting
The views expressed herein are the sole responsibility of the author and do not necessarily reflect those of this website or its editors.