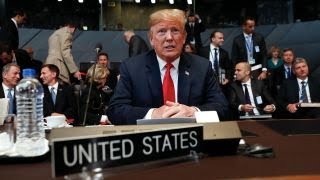 The outcome of the July11-12 NATO meeting in Brussels got lost amid the media's obsession with President Donald Trump's bombast, but the "Summit Declaration" makes for sober reading. The media reported that the 28-page document "upgraded military readiness," and was "harshly critical of Russia," but there was not much detail beyond that.

But details matter, because that is where the Devil hides.

One such detail is NATO's "Readiness Initiative" that will beef up naval, air and ground forces in "the eastern portion of the Alliance." NATO is moving to base troops in Latvia, Estonia Lithuania, the Czech Republic and Poland. Since Georgia and Ukraine have been invited to join the Alliance, some of those forces could end up deployed on Moscow's western and southern borders.

And that should give us pause.

A recent European Leadership's Network's (ELN) study titled "Envisioning a Russia-NATO Conflict" concludes, "The current Russia-NATO deterrence relationship is unstable and dangerously so." The ELN is an independent think tank of military, diplomatic and political leaders that fosters "collaborative" solutions to defense and security issues.

High on the study's list of dangers is "inadvertent conflict," which ELN concludes "may be the most likely scenario for a breakout" of hostilities. "The close proximity of Russian and NATO forces" is a major concern, argues the study, "but also the fact that Russia and NATO have been adapting their military postures towards early reaction, thus making rapid escalation more likely to happen."

With armed forces nose-to-nose, "a passage from crisis to conflict might be sparked by the actions of regional commanders or military commanders at local levels or come as a consequence of an unexpected incident or accident." According to the European Leadership Council, there have been more than 60 such incidents in the last year.

The NATO document is, indeed, hard on Russia, which it blasts for the "illegal and illegitimate annexation of Crimea," its "provocative military activities, including near NATO borders," and its "significant investments in the modernization of its strategic [nuclear] forces."

Conn M. Hallinan is a columnist for Foreign Policy In Focus, "A Think Tank Without Walls, and an independent journalist. He holds a PhD in Anthropology from the University of California, Berkeley. He oversaw the (more...)
Related Topic(s): Alliances; Allies; Conflict; Military; NATO, Add Tags
Add to My Group(s)
Go To Commenting
The views expressed herein are the sole responsibility of the author and do not necessarily reflect those of this website or its editors.