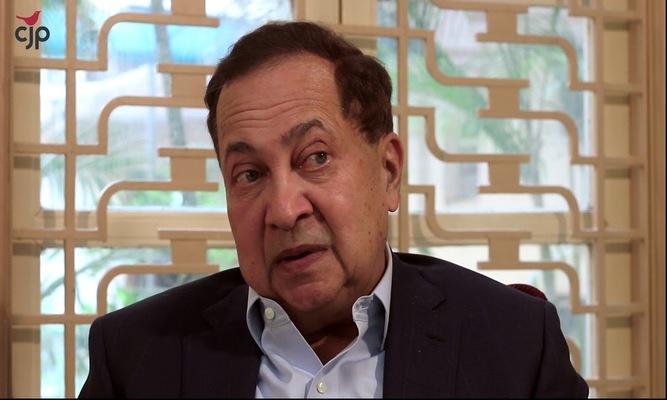 N. Ram, chairman of The Hindu, can't bury his head in the sand and forget that his butt is in the air and open to assaults of all kind.

He published a front-page report on Rafale nonsense under his byline, producing an image of a "page" that is cropped, and is stonewalling questions on why he indulged in this grave scurrilous journalism of the yellow kind. (The newspaper in a bid to cover its track has published the "uncropped image" of the page in its Saturday edition, a classic case of attending a memorial after you've fired the bullets.)

Mind you, the questions at N. Ram are purely directed on social media by general readers as the scandalous watchdogs of press, Press Council of India and Editors' Guild look the other way instead of putting him and his newspaper under the dock.

In an ideal world, these two bodies would haul N. Ram and his newspaper up for questioning. A rather filmi version would be the editorial desk of Hindu across the country, putting their pens down in protest, for their chief having failed them in public eye so miserably. It wouldn't be unprecedented if the Indian parliament hauls him up for questioning for only recently a journalist Abhijit-Mitra was similarly made to front up by the Odisha state assembly and consequently jailed for 43 days.

None of this would of course happen. Even if this malicious piece of journalism carried in it the seeds to alter and shape the outcome of the 2019 General Elections. To alter the distinction between stability and anarchy, honesty and corruption, a united and a fragmented India.

Only the readers of The Hindu, or sustained pressure in social media, could force N. Ram to come clean on the matter. Did he really crop the page? Or the paper he got from his "source" was cropped to begin with?

If he did crop the page at whose behest was he sacrificing the cardinal tenet of journalism? What is his agenda? What did he stand to gain? Didn't it cross his mind that it could compromise the security of the country?

If he got a "cropped" page to begin with, N. Ram would've to let out his source. He can't be protecting this mole who has done no favour to his or his newspaper's reputation. The world would also know the forces who are working overtime to destroy the nation we know as India.

The "uncropped page" would've revealed the notings of then defence minister Manohar Parrikar that the PMO is "monitoring and not interfering" in the Rafale deal. That the notings of deputy or under-secretary S.K. Sharma was an "over-reaction."

At a sociological level, this stamps the mainstream English media of India as the dons of "fake news." For many a year now, I have been pointing out how our English MSM deliberately twists and manufactures news and headlines to suit their ulterior agendas. As discerning readers became mindful, English MSM resorted to "pot-calling-the-kettle-black" trick: Blame social media as purveyors' of "fake news." They began holding seminars, inviting dubious experts who gravely nodded at the presumed menace of social media in distorting reality.

All this while, the truth is English MSM carry a greater accountability for they "sell" their newspapers to unsuspecting readers. Whereas social-media platforms are without fences and have little to gain by revenue and are organic. English MSMs often plug "fake" stories as appears to be the case of "cropped page" and N. Ram's fake reportage.

Today N Ram is an embarrassment to the entire journalistic fraternity. He has let down an entire community. By choosing not to come clean on the "cropped-page" scandal, he has shown himself to be not working in India's interests. The fire in coming days would keep him on the boil.

Related Topic(s): Assembly; Defence; Journalism; Newspapers; Parliament; Scandals; Security, Add Tags
Add to My Group(s)
Go To Commenting
The views expressed herein are the sole responsibility of the author and do not necessarily reflect those of this website or its editors.