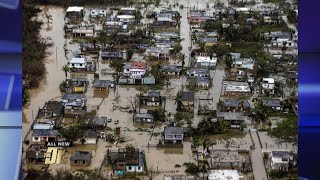 Puerto Rico is a beautiful island that is still struggling with the destruction left by terrible storms and a weak response from our federal government.

I saw it myself on a Massachusetts delegation trip to Puerto Rico on Friday.

Nearly four months after Hurricane Maria hit, we were concerned that attention to the island had dropped off, and we wanted to see first-hand what was going on now. It was a day of extremes -- resilience and hope were side-by-side with indifference and incompetence.

Hospital del Niño, the children's hospital in San Juan, is home to almost three dozen children with severe disabilities from families of limited means. It also provides rehabilitation, therapy, and similar services to thousands of other children. The building is solid -- almost a century old -- and the children's living spaces and therapy areas are scrubbed clean and decorated in cheerful colors. During the storm, the dedicated staff moved the frightened children into interior hallways and held on. When an enormous tree branch smashed down, they heard the crash and felt the whole building shake. Afterwards, they were without power for days. Then came what hospital leaders called a "blessing": workers from Tesla arrived to set up solar panels and batteries that provided power for about 18 hours a day. With that help, the hospital never needed to stop operating.

Now it's been nearly four months. Puerto Rico is no longer in the news each day, but the fallout from the storm is everywhere. The older children go to school, but only half-days because the school has no drinkable water. The hospital's leaders say the solar power system is unplugged because now that the hospital is back on the grid, they need the power company's help to switch back and forth from the grid to solar, and, so far no one at the power company has answered the hospital's requests to set that up.

The director worries about the future. Professionals are leaving Puerto Rico, and just as a child becomes attached to a therapist and begins to make a little progress, that person moves on. The budget had always been a worry, with the hospital counting on people locally to contribute a significant fraction of their operating costs -- and now that there are fewer people in Puerto Rico to give money and so many more organizations needing help, they don't know how they will manage. The solar panels could save the hospital thousands of dollars a month in utility bills, but Tesla only lent the equipment, and it was estimated that the hospital will have to come up with hundreds of thousands of dollars to keep it. That would be a big chunk of the hospital's annual budget -- an impossible stretch.

And so it went around the island.

Outside San Juan, we visited Concilio de Salud Integral de Loza, a community health center. The director said they were the only emergency room and health care provider for a region of nearly 100,000 people. Power lines are still down. The center is on its fourth generator (the first three burned out). And they count themselves lucky. The families they serve have no power, the water isn't drinkable, and, for many, their homes still have no roofs and, in some cases, no doors or windows. We visited a shelter called Canóvanas where 21 families, from grandmas to small children, have lived for months.

But the people keep working. The hospital staffers rock the babies and laugh with the toddlers. The health center nurses check blood pressures and hand out medications. Police work round the clock, and repair crews are everywhere.

Friday morning we talked with volunteers from the Massachusetts State Police who are assisting local police with everything from directing traffic to solving murders. FEMA has a huge operation on the ground, and its volunteers and personnel have approached every job with enthusiasm and determination to help.

But even federal help has huge problems. Because they are constrained by law, the Army Corps of Engineers is spending money to rebuild a senseless, antiquated power grid that requires Puerto Rico to import fuel instead of updating their system with renewable energy sources. Congress ignores Puerto Rico's huge debts -- debts that discourage any long-term investments in the island. Large parts of the island remain inaccessible, and no one knows when they will have reliable power and clean water.

There are dedicated and determined people in Puerto Rico, and some terrific workers from the mainland. But my bottom line: It's just not enough. The need is enormous, and the response from our federal government has been too little too late.

The people of Puerto Rico are part of our American family. They are US citizens. They are fellow human beings. And they deserve more than someone tossing them a few rolls of paper towels and then forgetting about them.

This week, Congress will be debating the budget. Budgets are about more than dollars and cents -- they are about our values. I'll keep fighting to make sure no one forgets Puerto Rico.

Thanks for being part of this fight.

Related Topic(s): Children; Hospital; People; Puerto Rico Devastation; Water, Add Tags
Add to My Group(s)
Go To Commenting
The views expressed herein are the sole responsibility of the author and do not necessarily reflect those of this website or its editors.