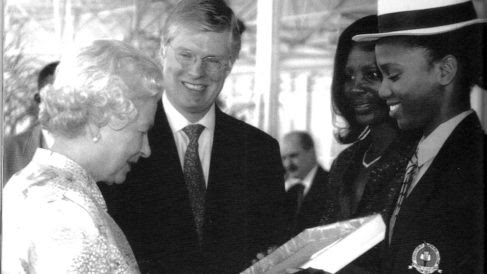 Princess Elizabeth was born in Mayfair, London, as the first child of King George VI and Queen Elizabeth I. She began to undertake public duties during the Second World War, serving in the Auxiliary Territorial Service. In 1947 she married Philip, Duke of Edinburgh, and their union was blessed with four children.

Princess Elizabeth was in Kenya at the time of her father's death in 1952. She was 27 years old when she was crowned Queen Elizabeth II on June 2, 1953. Her coronation thrust her into the role of Head of the Commonwealth. At the time, the Commonwealth consisted of far-flung colonial territories in the British Empire. Indeed, such was the global reach of British rule that it gave rise to the saying - "the empire on which the sun never set." Queen Elizabeth II has reigned as a constitutional monarch, through major domestic and global political changes. Some of the changes altered the world drastically and permanently. Nevertheless, the oldest and longest-serving Head of State continues to steer the ship of the monarchy, with a steady hand and resolute spirit. Her familiar, dignified and uncontentious presence on the world stage is a lodestar. Indeed, she personifies grace under pressure and exemplifies devotion to official duty that is not easily matched.


The Commonwealth presently comprises 53 countries spread across Africa, Asia, Europe and the Pacific. The bloc covers approximately twenty per cent of the world's land area, and represents an estimated population of 2.4 billion people, almost a third of the world population. The Queen is the titular and ceremonial Head of the Commonwealth. "The Commonwealth bears no resemblance to the empires of the past. It is an entirely new conception built on the highest qualities of the spirit of man: friendship, loyalty and the desire for freedom and peace." - Queen Elizabeth II.

An integral part of her responsibility as Head of the Commonwealth is her attendance at the Commonwealth Heads of Government Meetings (CHOGM). The biennial summits are hosted by different member states of the Commonwealth. The diverse community works together to promote prosperity, democracy and peace. The 2018 CHOGM had the theme, "Towards a common future". The focus was on ensuring that the Commonwealth is "responsive to global challenges and delivers a more prosperous, secure, sustainable and fair future for all its citizens, particularly its young people".

Stuart Mole, former Director-General of the Royal Commonwealth Society, thought very highly of Priscilla's achievement, and decided that Priscilla, and I, as the school's representative, should be formally included in the 2003 CHOGM agenda. I was totally amazed when he informed me that we were both to be presented to Queen Elizabeth II.

I prepared a customized, commemorative plaque to present to the Queen, and suggested that Priscilla and her classmates compose a Commonwealth-themed poem to honour her role as the Head of the Commonwealth, which Priscilla would present to her. I divulged my plan to Stuart Mole, and he stressed that the Queen seldom ever received gifts personally, and such offerings would have to be routed through royal aides. However, a request was relayed to Buckingham Palace.

To my surprise and disbelief, I was informed by Buckingham Palace that the Queen had decided to personally receive our gifts. This was an act of sheer humility and kindness on her part. She unilaterally decided to break with entrenched traditional royal protocol, and also jettison strict security safeguards to favour us. To this day, I am humbled that Queen Elizabeth II honoured me in such a manner, as for all intents and purposes, I was a 'nobody.'

And so it came to pass that I shared memorable moments with the monarchess. The crowning glory of the experience, for me, was the realisation that for the duration of our meeting, Ma'am, as she is referred to, smiled and seemed genuinely engaged. She displayed no scintilla of hubris, boredom or condescension; rather she expressed sincere gratitude and made amiable remarks as she took hold of our presentations.

Queen Elizabeth II has not been immune to personal misfortune or grief. She faced calls for the abolishment of the monarchy and press criticism of the royal family after the breakdown of her children's marriages. More painful and sad for her was the tragic death in 1997 of her former daughter-in-law Diana, Princess of Wales and mother of Prince William, second in line to the throne. Princess Diana's death rocked the monarchy to its foundations. In recent times, she experienced heartbreak and disappointment when her grandson, Prince Harry, sixth in line to the throne, made a thunderous decision to not only quit his official royal obligations, but to physically remove himself and his family from British soil.

The monarchess has been able to sail adverse storms, and withstand fresh and unexpected challenges admirably. Her herculean ethos of personal sacrifice above all else is legendary and unyielding. She evinces nobility of character and symbolizes time-honoured values in an age of turmoil and widespread depravity. Long live the Queen!