It's, of course, not a story about something which ever happened to me. I never met the fellow, nor did I ever see him in concert. In fact, the closest I can claim to actual contact with Elvis Presley is that my first cousin once had a date with him. She's a very intellectual woman, who went on to become the president of NOW in Alabama, and taught economics at a university in Texas. I believe at the time she had won some kind of beauty pageant, and wound up sitting across the dinner table from the Pelvis. I also never spoke with her about the incident, but what I'm told is that she actually found him quite boring, until he took out his guitar...

But, the tale I'm about to relate (and which I've been meaning to write down for some time) comes from a gentleman I was a member in a spiritual organization with. His name is Bill Larrabure. He came to this country from Peru in 1953, and became a permanent resident in 1961. Bill also attended University of California studying Art Design. He eventually went on to produce over 100 educational films. At least that was how many he had produced at the time of his relating this story to me which, as I said, was some time ago.

I guess it was soon after leaving school that Bill decided he wanted to be in the movie business. Because at some point he rented a cottage on one side of the driveway leading to Alfred Hitchcock's old estate, with the intention of writing screenplays. He was apparently a spiritually oriented fellow even back then, because early every morning (at around 4 or 5 AM) he would sit on his front porch to meditate.

On one such day, he heard the roar of what he thought was a motorcycle approaching. As the sound became louder, it turned out to be two motorcycles and they stopped not too far from where Bill was sitting. As the two gentlemen who were riding them approached, he noticed that they were both wearing the same rather odd attire. Their shirts were paisley, but the pants were plaid. And when they dismounted, it became clear that they were scoping out the area for some undisclosed reason. The two of them walked right up to where Mr. Larrabure was sitting, and he said at least one of them came so close their noses almost touched.

After apparently being satisfied that our friend posed no immediate threat, they then turned in the direction from whence they came, and gave an "all clear" sign. Very soon a long Cadillac limousine approached, with two astonishingly beautiful blond women in the front seat, both wearing chauffeur outfits. When the car stopped, the chauffeur in the driver's seat honked the horn, intended for the villa directly opposite Mr. Larrabure's. When no one responded, she honked once again. After still no one responded, the chauffeur on the passenger side of the car got out, and opened the door on the right side of the car. At this point, out emerged The King. And Bill said, make no mistake, he was fully aware, in every possible way, that he was, indeed, "The King".

Now, I don't recall if Elvis then took a loudspeaker out from inside the car and placed it on the roof, or if there was one already mounted there. But a phonograph player was definitely in the back seat on which the King proceded to place a record. What followed was the unmistakable strains of Elvis' own rendition of "Love Me Tender", at a decibel level that no human being could possibly ignore.

Soon after, a very excited Ann-Margret, opened the front door, moved quickly towards the car, and got in...

Either it was the following morning (or the next weekend), there was an exact repeat of what had happened before: the two men on motorcycle (with the paisley/plaid outfits)... the limo with the two blond chauffeurs... and once again Elvis having to resort to his mobile loudspeaker system to cajole Ms. Margret from her warm & cozy abode.

But the scene which immediately followed, and our hero witnessed, was somewhat rather different. As Bill was trying to meditate, this time he heard a car pulling up. But, when he opened his eyes, what he saw was a very, very long, pure white, antique Rolls Royce, with a special extended section, just for the chauffeur, which had no roof. And when the door opened, out poured a quite inebriated Ann-Margret wearing a mink coat, who somehow managed to find her way to the house.

Bill says that the next time the familiar scene occurred, Ms. Margret apparently needed nothing more than the honking of the horns. And when she appeared, The King said, "How did you like your birthday present?" To which Annie cooed, 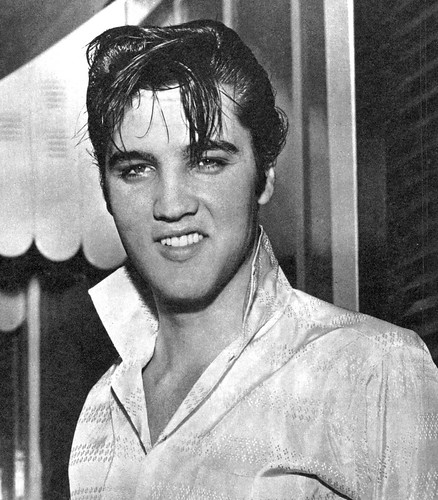