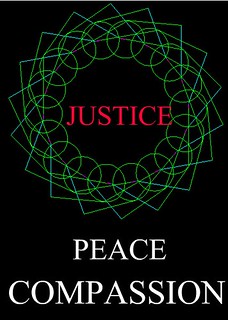 Justice is built on peace. Perhaps this historic agreement with Iran will set an important precedent.
(Image by gurdonark)   Details   DMCA
;">DMCA

For the United States to sit and talk and come to an agreement with a nation it has been antagonizing and demonizing since the dictator it installed in 1953 was overthrown in 1979 is historic and, I hope, precedent setting. Let's seal this deal!

Four months ago the Washington Post published an op-ed headlined 'War With Iran Is Probably Our Best Option.' It wasn't. Defenders of war present war as a last resort, but when other options are tried the result is never war. We should carry this lesson over to several other parts of the world.

The time has come to remove the "missile defense" weaponry from Europe that was put there under the false pretense of protecting Europe from Iran. With that justification gone, U.S. aggression toward Russia will become damagingly apparent if this step is not taken. And the time has come for the nations that actually have nuclear weapons to join and/or comply with the nonproliferation treaty, which Iran was never actually in violation of.

In addition to the prevention of a massive bombing campaign in Syria that was prevented in 2013, a major recent success in war-lie-preparedness is the holding off, thus far, of a U.S. war on Iran -- about which we've been told lies for decades now. The longer this debate goes on, the more it should become clear that there is no urgent emergency that might help justify mass killing. But the longer it goes on, the more some people may accept the idea that whether or not to gratuitously bomb a foreign nation is a perfectly legitimate policy question.

Both arguments also reinforce the idea that there is something about Iranians that makes them unqualified to have the sort of weapon that it's alright to voluntarily spread to other nations. Of course, I don't actually think it's alright for anyone to have nuclear weapons or nuclear energy, but my point is the bias implicit in these arguments. It feeds the idea that Iranians are not civilized enough to speak with, even as one-half of the debate pushes for just that: speaking with the Iranians.

On the plus side, much of the push for a war on Iran was devoted for years to demonizing Iran's president until Iran, for its own reasons, elected a different president, which threw a real monkey wrench into the gears of that old standby. Perhaps nations will learn the lesson that changing rulers can help fend off an attack as well as building weapons can. Also on the plus side, the ludicrous idea that Iran is a threat to the United States is very similar to the idea that Iraq was such a threat in 2002-2003. But on the negative side, memory of the Iraq war lies is already fading. Keeping past war lies well-remembered can be our best protection against new wars. Also on the negative side, even if people oppose a war on Iran, several billionaire funders of election campaigns favor one.

Will Congressman Robert Hurt who claims to represent me, and who got Syria right in 2013, commit to taking no funding from those warmongers? Here's what Hurt had to say on Tuesday:

"The Threat of a Nuclear Iran Persists

"The long-running nuclear negotiations with Iran and the United States, China, France, Germany, Russia, and the United Kingdom finally reached a head early this morning. Even with the deal reached, I am skeptical that Iran will keep their word, act in good faith, and abide by the terms of the deal."

The deal is an INSPECTION arrangement, not based in any way on anybody trusting anyone.

"I remain committed to the goal of eliminating Iran's nuclear capabilities because the prospect of Iran attaining the ability to produce a nuclear weapon is a grave threat to the world, and it is a very real possibility that this deal may only fuel Iran's ability to expand its nuclear ambitions and facilitate its efforts to spread terror in the Middle East."

What nuclear ambitions? What terror? This from a Congressman who voted for pulling out U.S. forces on June 17th but has taken no further action and has funded the U.S. operation that is currently killing people in the Middle East?

"Iranian leaders clearly remain focused on expanding their nuclear capabilities. They only want to do the bare minimum necessary to lift damaging international economic sanctions that have crippled their economy."

What mindreading feat is this based on? Where's evidence? Haven't we learned to demand it yet?

"Iran is the world's largest state sponsor of terror."

David Swanson is the author of "When the World Outlawed War," "War Is A Lie" and "Daybreak: Undoing the Imperial Presidency and Forming a More Perfect Union." He blogs at http://davidswanson.org and http://warisacrime.org and works for the online (more...)
Related Topic(s): IRAN NO NUKES; Iran Embargo; Iran Nuclear Talks, Add Tags
Add to My Group(s)
Go To Commenting
The views expressed herein are the sole responsibility of the author and do not necessarily reflect those of this website or its editors.