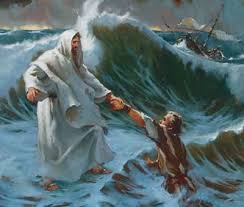 In today's Gospel, we hear Matthew's iconic account of Yeshua walking on water - and of his invitation to Peter to follow the Master's example.

The story is relevant to our times filled as they are with turbulence, polarization, and uncertainty. Those were the disturbing characteristics of Yeshua's time as well - and of Matthew's early church. In both contexts, there was turbulence everywhere. But despite it all, the early followers of Yeshua were asked to do the impossible - to walk on water themselves.

Before I get to what that might mean for us, here's a reminder of how our own tempestuous times mirror those of Yeshua and Matthew.

If the truth be told, I must admit that I hardly know what to think anymore. The polarizing spirit of the day has me pretty upset. I can barely listen to the news each day. And the mere images of the politicians I have come to despise cause my stomach to churn. I can't stand to hear their voices - or those of their ever-harsher critics. And besides that, I see no alternatives. (How much better is Joe Biden than Donald Trump?)

However, the immediate cause of my upset and confusion is the video I posted here last week - an interview by Jason Dean of Sacha Stone, the founder of the International Tribunal for Natural Justice. It generated a lot of controversy when it appeared on OpEdNews on Thursday.

Subsequently, a whole ZOOM meeting of the site's editors, contributors, and readers had everyone arguing about the interview's truth claims. Is the coronavirus a pandemic or a "plandemic?" Does wearing a facemask make sense? There was wide disagreement during the call.

Those questions and emotions generated by the video were rooted in the polarizing figure of Sacha Stone himself. He's charismatic, articulate, extremely outspoken, and given, I fear, to hyperbole. On the one hand, he is deeply spiritual and reflective of the best of the mystical traditions shared by all the world's great faiths. His passionate concern about and energetic action against the trafficking of children for pedophilic purposes is unmistakable and genuine.

On the other hand, he somewhat off-puttingly fills his discourse with references to evil, Satanic cults, the deep state, and to ruling class rituals devoted to drinking the blood of fear-adrenalized two and three-year-olds.

Obviously, then Stone himself is controversial. He illustrated, I said, the difficulty of classifying people today on the basis of the traditional categories of "left" and "right," liberal and conservative.

For instance, he is a supporter of President Trump. But he has long despised, he says, all politicians as liars and sell-outs to the rich 1% that govern our nation through the lawmakers they have long since bought and sold. Nonetheless, Stone sees Trump as one of the two modern-era U.S. presidents of true human worth. The other one? John F. Kennedy.

In all of this, Stone finds prominent support in a former CIA operative, Robert David Steele. Steele was described as "brilliant" by one OEN ZOOM call participant who knows Steele well, has corresponded with him, and has interviewed him formally. In fact, as an elite insider, Steele not only backs Stone's claims about cults and blood, he serves as Commissioner and Chief Counsel on Stone's International Tribunal for Natural Justice. Steele says 22,000 children are disappeared each day for purposes of pedophilia and employment in those blood rituals.

Is all of that disturbing and confusing enough for you? It's almost more than I can bear. It has my head spinning with questions I thought resolved long ago about Trump, his portrayal in the media, and the COVID-19 pandemic. Even more seriously, it makes me wonder if our world is indeed controlled by sexual perverts who seem (in Stone's words) "soulless" and as if they were aliens from another planet.

My only hope is that despite Steele's endorsement, Stone's claims about trafficked children are exaggerated. Failing that, my hope is that the truth of Stone's accusations will all unmistakably come to light in the context of the explosive tip-of-the-iceberg saga of Jeffrey Epstein and Ghislaine Maxwell. Such revelation has world revolutionary potential.

Related Topic(s): Cults; Faith; God; Jesus; Pandemic; Politics; Sunday; Truth, Add Tags
Add to My Group(s)
Go To Commenting
The views expressed herein are the sole responsibility of the author and do not necessarily reflect those of this website or its editors.