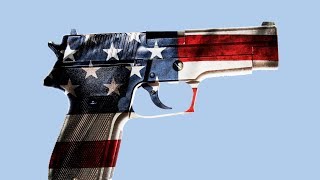 Once again, we are faced with another mass shooting. This time the cold-blooded killings took place at Marjory Stoneman Douglas High School, killing 14 innocent students and three adults. This horrific mass murder of young and old attests to the criminal negligence of our lawmakers and president, who dispense with their responsibility by offering to the bereaved families hollow condolences and fake prayers.

No parent can draw comfort from these empty expressions. Nothing can assuage the agony and the unbearable pain that parents feel when their child is lost to an outrageous and utterly senseless attack that could have been prevented.

When will lawmakers face the bitter truth that America is at war with itself? A de-facto civil war is consuming us from within. Firearms are mercilessly robbing the lives of 33,880 each year -- nearly five times more than American soldiers killed in the Iraq and Afghanistan wars combined (4,530 and 2,408 respectively). On average, 93 people are killed from gun violence every day, and at least 239 school shootings have occurred across the United States since 2012; a majority of the over 400 casualties are children under the age of 19.

And yet, after every such unconscionable carnage, you hear our derelict political leaders suggesting that it is not the right time to talk about gun control laws when the families and friends of the victims are agonizing about the loss of their loved ones.

When will the right time come? How much more pain and suffering must our own fellow citizens endure before we act?

Shame on every single House and Senate member who each year takes millions in blood money as a political contribution from the National Rifle Association to ensure their reelection. Perhaps only when some of these lawmakers lose a child of their own will they begin to grasp the excruciating pain that parents bear when their telephones ring, only to be told that their child was just gunned down at school by a random shooter. Yes, every lawmaker should stop and think how it really feels. But then again, are they even capable of feeling?

The Book of James says it best: "Faith without works is dead." Without action, "thoughts and prayers" cannot be counted on to stop random mass killings; this has been proven by history time and again. The occasion for condolences and prayers expired a long while ago.

How regressive and totally ignorant can our congressmembers be when they defend the Second Amendment of the Constitution, "A well-regulated Militia, being necessary to the security of a free State, the right of the people to keep and bear Arms, shall not be infringed"? This amendment was written over 200 years ago, when firearms were essential for self-defense against foreign militaries and tyranny.

Wake up, you so-called legislators. Time has changed. There is no Gold Rush and no Wild West. Every congressmember, and Trump in particular, who opposes the passage of effective gun control, has the blood of innocent men, women, and children on their hands. Every single one.

Those hypocrites who oppose gun control keep telling us that guns don't kill people, people kill people. What a revelation! Does it take a genius to realize that if guns were not readily available, a would-be killer could not possibly execute dozens of people with a knife or a club before getting killed or captured? Here is the absurdity of their argument in real numbers, as demonstrated by only a handful of examples of mass shootings that unequivocally make the point:

In the Las Vegas shooting: 851 injured, 58 killed -- in Orlando's Pulse Nightclub: 49 killed -- at Virginia Tech: 32 killed -- at Sandy Hook Elementary: 27 killed -- at Marjory Stoneman Douglas High School: 17 killed. How many of those victims would have been killed if the perpetrator did not possess a gun?

Every one of us must confront the truth. Just imagine, if we were engaged in another foreign war and suffered nearly 3,000 casualties -- the average number of Americans killed each month by firearms -- how would we react? Why are we not hearing the outcry of every American who is sickened by these horrifying occurrences?

Related Topic(s): Congress; Congressional Ethics; Murder; School; Shootings, Add Tags
Add to My Group(s)
Go To Commenting
The views expressed herein are the sole responsibility of the author and do not necessarily reflect those of this website or its editors.