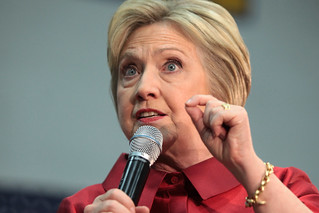 Now, it seems the mainstream media have decided the battle of the Big Dollars will pit Trump v. Clinton in the Fall, even though Bernie just won Indiana; even though Clinton is in the midst of a federal investigation by the FBI and Justice Department. Why doesn't anyone in the media talk about that? More bizarre, the Trump machine has been weirdly quiet about that little juicy news nibblet. The Donald is fearless when questioning Obama's birth certificate, or mocking Ted Cruz' wife, or Carly Fiorina's looks, or implying that Cruz' dad might have been involved in the JFK assignation ... yet not a peep about an actual Real Live Potential Indictment of his presumptive opponent? We cannot believe that he's too restrained to mention Hillary's unmentionables, so what gives?

Does Trump's silence on this HUGE potential scandal strike anybody else as strange? Is it possible that the tin-foil-mad-hatters are right and Trump is a covert Hillary mole working to get her elected? No? Too crazy?

Okay, but what is taking the FBI so long to conclude their investigation? In April there was buzz that Hillary would be subpoenaed "within days" and that hasn't happened yet. It does seem that there must be some political motivation for the delay, whether to harm her or help her is the big question. It's another crazy twist in an already seriously twisted election season. And what happens if the FBI concludes there is evidence of some kind of criminal mishandling of classified information? The Department of Justice is then left with a potentially devastating choice: If the DOJ doesn't present the evidence to a Grand Jury, it sets a terrible precedent and makes the FBI and its agents look like fools. But if the DOJ does presnt the eviodence to a Grand Jury, it makes the Democratic Party and the State Department appear to be co-conspirators. (Anybody remember that "third-rate burglary" at the Watergate a few decades back?)

The press has done a piss-poor job of reporting this story thus far. And it wasn't helped by Congressional hearings that focused on deleted email instead of the probability that classified Intel was passing through her private server. What is interesting, however, is that those incessant Benghazi hearings may not have been as redundant as we believed. Was there really something there that the mental midgets on the Committee failed to uncover? And is it possible that the killing of Ambassador Christopher Stevens and three other U.S. personnel at the lightly guarded U.S. "consulate" in Benghazi, Libya, on 9/11/12 was a direct result of Clinton's -- intentional or accidental -- transferring of classified info over an unsecured server?

How could that have happened? Well, we can assume Clinton accessed this unsecured server to read her email over her cellphone, tablet, notebook, etc., while traveling in foreign countries. How hard would that be to hack? I saw a teenager do it in a mall on Dateline NBC. Surely ISIS has somebody at least that skilled on their team.

Most of the information relating to this potential scandal comes from notoriously debased websites like Newsmax or Brietbart. And almost all the reporting is a result of Judicial Watch's multiple FOIA State Dept. lawsuits over the last few years. I'm no fan of Judicial Watch or their well-funded, longstanding witch hunt against anything Clinton, but sometimes even the questionable sources turn up valid information (see: National Enquirer and the John Edwards affair).

(Where are the SPOTLIGHT journalists when you need them?)

Long story longer, Judicial Watch sued the State Department under FOIA to release key facts about information transferred over Clinton's private server, and as a result the State Department had to admit it withheld at least one important Benghazi email. This is from (forgive me) Breitbart:

"The Obama State Department admitted last week that it withheld a key Benghazi email of former Secretary of State Hillary Clinton from Judicial Watch since at least September 2014. Had the department disclosed the email when first supposedly found, Clinton's email server and her hidden emails would have been revealed before she authorized the alleged deletion of tens of thousands of emails.

"This development comes in our July 2014 Freedom of Information Act (FOIA) lawsuit seeking records related to the drafting and use of the Benghazi talking points (Judicial Watch v. U.S. Department of State (No. 1:14-cv-01242). The lawsuit, which forced the disclosure of the Clinton email records, seeks records specifically from Clinton and her top State Department staff.

"Contradicting an earlier statement to the court, an April 18, 2016, State Department letter admits that it found the email at issue in 2014 but that it was held back in its entirety: 'Also, upon further review, the Department has determined that one document previously withheld in full in our letter dated November 12, 2014 may now be released in part.'

"The referenced November 12, 2014, letter does not discuss any withheld emails. A search declaration suggests the hidden email was found in September 2014 as a result of a search in response to Judicial Watch's lawsuit.

Kathy never expected a career in radio as a talk show producer. Born and raised in Atlanta, Georgia, Kathy was completing her nursing degree when in 2001 - in an emergency - she was asked to fill in as the producer of Mike's program. Within a few (more...)
Related Topic(s): Benghazi; Email; Federal Agency FBI; Hillary Clinton; Scandal, Add Tags
Add to My Group(s)
Go To Commenting
The views expressed herein are the sole responsibility of the author and do not necessarily reflect those of this website or its editors.