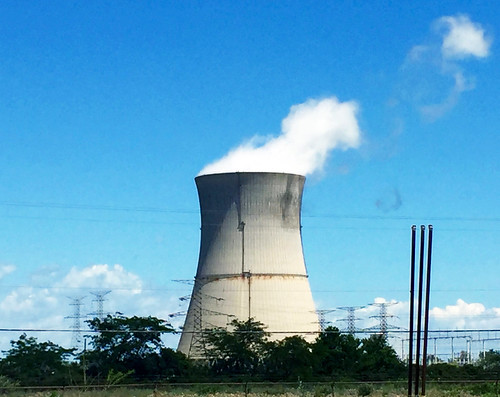 The U.S. Attorney's Office and FBI last week charged the speaker of the Ohio House of Representative and four others in a $61 million scheme to use $1 billion in ratepayers money to keep two decrepit nuclear power plants operating.

And, said the U.S. Attorney for the Southern District of Ohio, David DeVillers, at a press conference after the arrests on July 21: "This is by no means over. We are going to continue with this investigation."

Those charged were involved in a "Conspiracy to Participate, Directly or Indirectly" in the scheme "through a Pattern of Racketeering Activity," declared the "Offense Description" that headed an 81-page federal "Criminal Complaint."

As DeVillers described it at a press conference as the "largest bribery, money laundering scheme ever perpetrated against the people of Ohio."

FirstEnergy Corp., whose former subsidiaries owned the Davis-Besse nuclear power plant 21 miles from Toledo and the Perry nuclear power plant 40 miles from Cleveland, funneled "dark money," he said, through a social welfare non-profit corporation to help Larry Householder become speaker of the Ohio House and get other legislators elected. Together, they then got a $1 billion bailout passed that places a fee on every electricity bill in the state through 2026 for the plants.

Atttorney DeVillers said that those involved in the scheme "were able to line their pockets." Householder took in "a half a million dollars for his personal benefit."

The "Criminal Complaint" speaks of how in 2016 "Company A Corp.'s [referring to FirstEnergy Corp.] "nuclear generation looked grim." It and "its affiliates reported a weak energy market, poor forecast demands, and hundreds of millions of dollars in losses." So, the company "actively sought a 'legislative solution' for its two-affiliated nuclear power plants in Ohio." There are then pages and pages of details about the investigation.

The "Criminal Complaint" can be viewed online at HERE

The year-long federal investigation involved recordings, and conversations of the defendants are rough, some laced with obscenities. For example, the "Criminal Complaint" speaks about some legislative opposition to Householder's seeking the speakership and Householder allegedly declaring: "Yeah, we can f*ck them over later."

Or, when a voter referendum was organized to challenge the bailout, the "Criminal Complaint" cites a "dinner club meeting on September 23, 2019, in the context of a discussion about the [referendum] Ballot Campaign. Householder told Clark in a recorded meeting: 'It is so important, it is so important, that they are not successful, because when the legislature votes on something it needs to stay law.' Staffer followed up, 'it's the beginning of your Speakership; it sets a bad precedent for the next six year, what we need to make them realize is that you (Householder) can't be fucked with.' Clark then agreed, 'it sends the message to everyone else"if you attack a member, we're going to f*cking rip your dick off.' Enterprise members thus made clear that preserving their legislative victory was necessary to proving the strength of the [Householder] Enterprise going forward."

The "Householder Enterprise" backed 15 candidates in primaries in 2018, including Householder himself, and six additional ones in the general election, with most candidates winning and the voting for Householder to become speaker, and most voting for the bailout.

The "Conclusion" of the "Criminal Complaint" states: "The above facts establish probable cause that Householder's Enterprise is an association-in-fact enterprise affecting interstate commerce, and the Defendants conspired to participate in the conduct of affairs of the enterprise by agreeing that a co-conspirator would commit a pattern of racketeering activity. To summarize, while operating together and functioning as Householder's 'team' the Defendants enriched themselves and increased Householder's political power by: engaging in a scheme to defraud the public"involving the receipt of millions of dollars in secret bribe payments through Householder's 501(c) (4) account in return for Householder taking official action to help pass a legislative bailout for two nuclear power plants; bribing and attempting to bribe individuals working on behalf of the Ballot Campaign in an attempt to receive inside information and defeat the Ballot Campaign; and concealing the scheme, their illegal activity; and the source of the funds transferring the Company A-to-Generation-Now payments through other controlled entities and knowingly engaging in monetary transactions with the proceeds."

The November 2019 article began: "The nuclear industry's violent assault on democracy in Ohio has taken a surreal leap. Ohio's GOP secretary of state has now asked the Ohio Supreme Court NOT to provide a federal judge with answers about key procedural questions surrounding the state's referendum process. The short-term issue is about a billion-dollar bailout for two nuke reactors and two coal burners. Long-term it asks whether targeted violence perpetrated by paid thugs will now define our election process. And whether the public referendum will remain a workable part of our democracy."